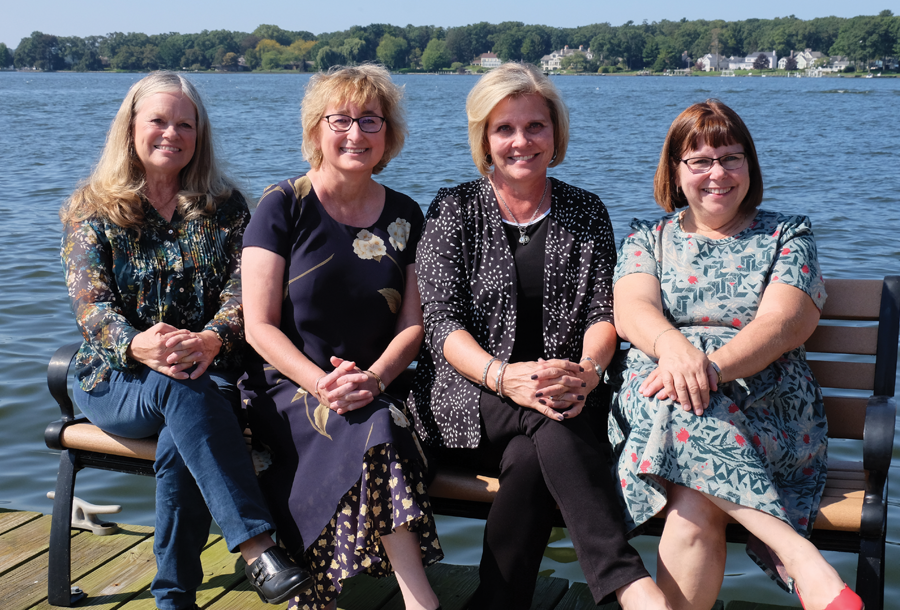 The chapel in Augsburg’s new Hagfors Center for Science, Business, and Religion is named for Elnar Gundal ’33. Read more in the Inspired Design feature.

Legendary high school coach and veteran Stan Nelson ’43 was honored in September by the Anoka, Minnesota, community. Following his World War II service, Nelson coached in Anoka for more than 30 years and won conference championships in ’55, ’62, ’63, ’64, ’72, and ’76, including 33 consecutive wins from ’62 to ’64.

Retired ELCA pastor Rev. Byron Schmid ’60 received his Swiss citizenship and was honored when he returned to Switzerland in September for the 750th anniversary of Rubigen, his ancestral village. He has done extensive genealogical work to document his family history and lead family tours in both Switzerland and Norway.

50-Year reunion celebration at Homecoming 2018. Learn more about how to get involved with your reunion. Sue Nelson ’67 received the President’s Award from the U.S. Tennis Association in October. Nelson organizes the Iowa All Stars event, a one-day tournament designed for athletes who compete in the Special Olympics.

Glen Peterson ’69 began teaching in Stillwater, Minnesota, in 1969 and taught for 40 years at Lakewood Community College in White Bear Lake, Minnesota. He spent many years coaching and was the director of the ski/snowboard school at Hyland Hills Ski Area in Bloomington, Minnesota. In retirement, he continues to help with instructor training. He and his wife, Kathy (Palmer) Peterson ’70, met at Augsburg, and daughter Jessica Peterson ’09 also attended Augsburg. As of this past September, Tom Koplitz ’74 [right] and Bill Nelson ’74 are both in the Minnesota Amateur Baseball Hall of Fame. They were co-captains of the 1974 Augsburg baseball team.

In November, Larry Morgan ’76 was presented with the Lifetime Recognition Award by the Twin Cities Compensation Network for his work in compensation and human resources.

Augsburg Board of Regents Chair Jeffrey Nodland ’77 and Becky (Bjella) Nodland ’79 sponsored a sculpture now on display in the Hagfors Center for Science, Business, and Religion. Read more in the Inspired Design feature.

40-Year reunion celebration at Homecoming 2018. Learn more about how to get involved with your reunion.

Athletic Director Jeff Swenson ’79 shares his perspective on Augsburg’s upcoming 150th anniversary. Read more in the Best Is Ahead feature. Rev. Scott Snider ’82, priest of the Roman Catholic Diocese of Springfield, Illinois, was named ecumenical and interreligious officer for the diocese in July 2017. Snider is also the pastor of three Illinois parishes in Pierron, Grantfork, and Pocahontas.

Alisa “Al” Holen ’90 received tenure at the University of Southern Indiana and is now an associate professor of art and design, ceramics. She also was selected as one of the featured artists in the 2018 American Pottery Festival at the Northern Clay Center in Minneapolis. She and her father, Professor Emeritus Norman D. Holen, were honored to present their exhibition, “Nature/Nurture,” at the Northern Clay Center this past October.

25-Year reunion celebration at Homecoming 2018. Learn more about how to get involved with your reunion. Eloisa Echávez ’94, ’98 MAL, executive director of La Oportunidad, a social services organization in Minneapolis, was honored by the Minnesota Vikings in September as part of Hispanic Heritage Month. She received a $2,000 grant, which she donated to La Oportunidad. Margaret Johnson ’96 has committed to a year of service with Minnesota Math Corps. She will tutor students in Roseville, Minnesota, in eighth grade math.

Trang Dinh ’01 was awarded the 2017 Excellence in Servicing Award from NorthMarq Capital. Dinh has 15 years’ experience as a portfolio analyst and asset manager, and is a respected, knowledgeable, and accomplished professional in her field.

Mark Peterson ’01 recently concluded a successful season of coaching his son, Charlie, on his first- and second-grade soccer team. Brian Kuhl ’03, an associate at Mayer Brown law firm, and his wife, Jesca Kuhl, generously donate their money to build homes in Uganda. The couple met while Brian worked as a teacher in the Peace Corps. In addition to paying for two homes that house roughly 15 Ugandan children, the Kuhls also have paid for schooling for these children and more than a dozen others.

Timothy “Tim” Stowe ’05 is the principal for Westwood Elementary School in Zimmerman, Minnesota. He previously served as principal and technology coordinator at Waterville-Elysian-Morristown, Minnesota. 10-Year reunion celebration at Homecoming 2018. Learn more about how to get involved with your reunion.

Brian Krohn ’08 is launching a smartphone app called Soundly. Developed with funding from the National Science Foundation and the National Institutes of Health, the app is designed to help people who snore through a voice-activated game that strengthens the muscles in the upper airway.

Newly promoted high school guidance counselor Derrick Smith ’08 received the THRIVE Teacher of the Year award for his work with middle- and high- school students. He teaches math and social sciences to eighth, ninth, and 10th graders of diverse backgrounds at a nontraditional Christian school in Augusta, Georgia.

In October, Joe Finstrom ’10 opened Lithium Mastering LLC, a mastering and music production studio in St. Cloud, Minnesota. Finstrom teaches at the Wirth Center for Performing Arts and plays cello in the St. Cloud Symphony Orchestra. After graduating from Augsburg, Finstrom attended the Institute of Production and Recording, where he earned an associate degree in audio production and engineering. Kia Burton ’11 is Augsburg’s new alumni engagement program associate. Burton most recently worked at the MHC Culinary Group assisting the accountant and the sales team. Prior to that, she was a sales coordinator at the St. Paul Hotel, in St. Paul, Minnesota. As an Augsburg student, Burton was a member of the Pan-Afrikan Student Union, worked as a Summer Bridge program mentor for TRIO/ Student Support Services, and served as a residence advisor in Urness Tower. She was also an Auggie Guide and worked in the James G. Lindell Library for four years.

Katia Iverson ’12 and Luke Iverson ’15 describe the joys and challenges of helping new arrivals acclimate to life in the U.S. Read more in the Welcome to America feature. Nial Nelson-Hopkins ’14 is currently employed by the San Diego Padres in their production department. Nelson-Hopkins received a 2017 Emmy Award for his part in producing a commercial advertisement for Padres membership. Katelyn “Katie” Davidson ’17 is the new sports and education reporter for the Pierce County Herald in Ellsworth, Wisconsin. While a student at Augsburg, Davidson worked at the League of Minnesota Cities in St. Paul, in the communications and public affairs department. She also worked part-time with Minnesota United FC professional soccer club in the public relations department.

Laura (Swanson) Lindahl ’15 MBA recently was promoted to assistant director of marketing management in Augsburg University’s marketing and communication division, which serves both Augsburg University and Luther Seminary. In her new role, she will continue to serve as editor of Augsburg Now.

Heather (Smith) Pokrzywinski ’16 MPA was hired by Essentia Health in the Moorhead (Minnesota) Clinic as a physician assistant.

Elaine Eschenbacher ’18 MAL, director of the Sabo Center for Democracy and Citizenship, describes how Augsburg’s LEAD Fellows Program shapes students and alumni. Read more in the Welcome to America feature. 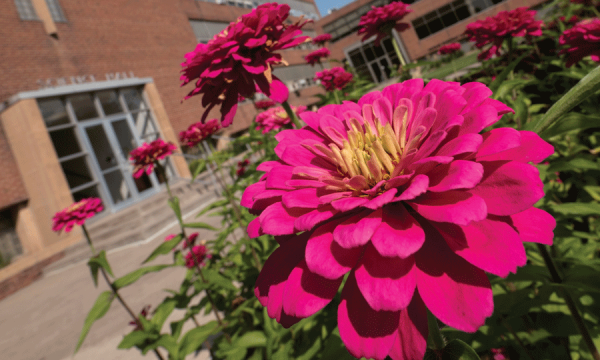 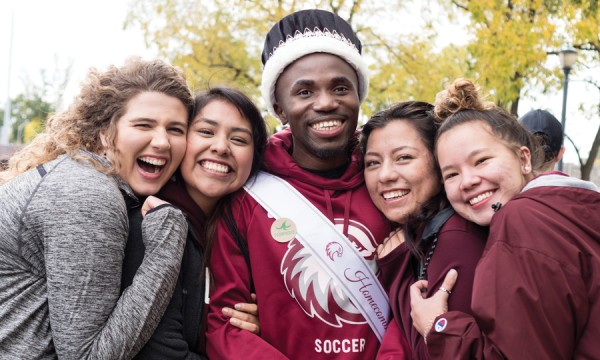 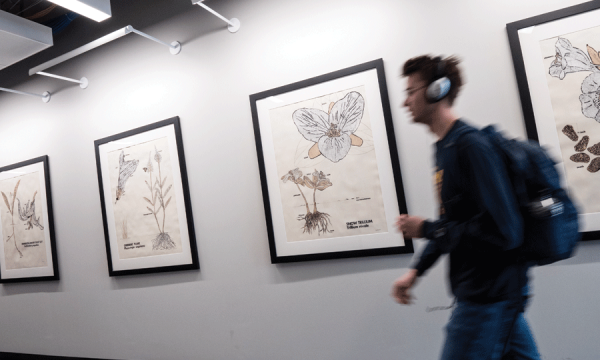 From Farm to Frame