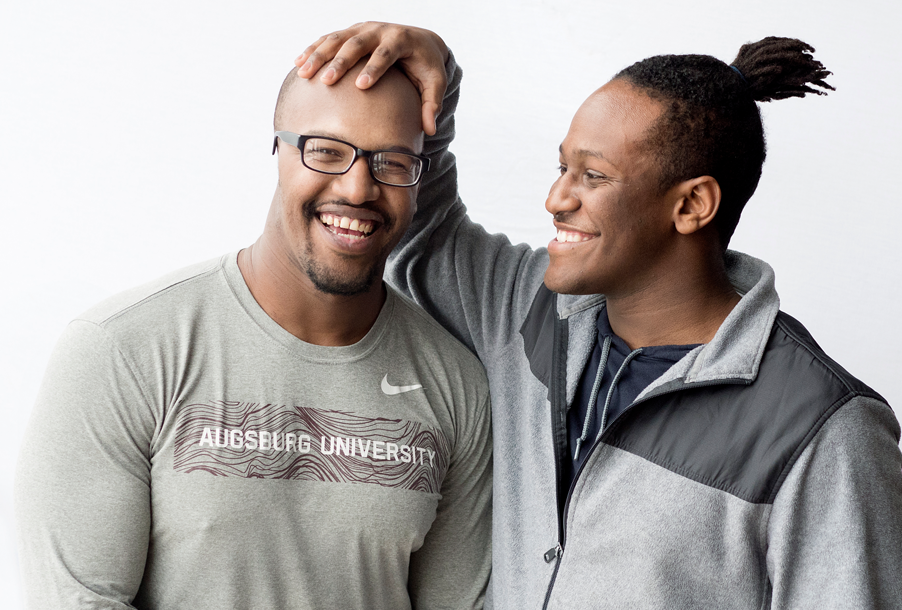 It could have been worse. Their parents could have made them hold hands (or even smile). But after each game during last year’s Auggie football season, the parents of the team’s four sets of siblings lined the eight players up for a Kodak moment

“We loved the tradition, but there was a bit of that ‘Come on, mom’ feeling, especially when they made us take a photo before our last game,” said wide receiver Nick Heenie ’19, whose not-so-little brother, Frank Heenie ’23, protects the Auggie line. “We were all so in the zone that we look mean, but that couldn’t be further from the truth. It was such a special year and an honor to play with brothers.”

Rounding up the octet was easy, especially after home games, when those same parents—led by the Heenie family—prepared meals for 80 players and their families. Head Football Coach Frank Haege said the team traditionally shares food and fellowship after one home game each year, but the siblings’ parents united the Auggie football family in an unforgettable way during the 2018 season.

“It was such a joy to coach four sets of siblings last year, particularly since I have twin boys, and I played football with my brother,” said Haege, whose 9-year-old son, AJ, spends so much time with the team that he maintains an Auggie locker. “Our team always feels like family, but we were especially close last fall. It reinforced that Augsburg is where students learn to be part of something bigger than themselves.”

Coaching four sets of siblings at one time was unprecedented for Augsburg Athletics, but siblings are not uncommon. Haege estimates he has coached eight sets of siblings during his 15-year tenure. In addition to football, siblings have competed on several teams recently: The Wilson twins dominated the wrestling mat, the Everett sisters commanded the lacrosse field, and the O’Conner brothers scored big on the ice.

Relatives on the roster

The list of sibling alumni who have played together at Augsburg could ll a football roster, not to mention the generations of families with Auggie pride running through their veins. An example: Athletic Director Jeff Swenson ’79 wrestled and coached for 25 years at Augsburg. His sister, Marie (Swenson) Hechsel ’90, played volleyball. Her son, Matt Hechsel ’15, wrestled, and her daughter, Stephanie Hechsel ’19, played volleyball.

Augsburg women’s ice hockey’s Megan Johnson ’19 also is playing out a family legacy. Her grandfather, Bob “Badger” Johnson, attended Augsburg for a year before transferring to the University of Wisconsin—Madison, where he secured seven NCAA Men’s Ice Hockey Championships. Her father, Mark Johnson, was a member of the fabled “Miracle on Ice” 1980 U.S. Olympic team and coach of the 2010 U.S. Olympic women’s silver- medal hockey squad.

Megan’s brother, Chris Johnson ’10, ’14 MAL, slapped the puck around for Augsburg and later served as men’s ice hockey assistant coach for seven seasons. It was during that time Megan picked Augsburg over the University of Wisconsin, where her grandfather, father, and two other siblings played. Although the colors of their jerseys differed, every member of the Johnson family has donned No. 10.

Women’s Ice Hockey Head Coach Michelle McAteer said that although Megan no longer has a sibling at Augsburg, members of the team are like family. Third- and fourth- year student-athletes have begun to mentor newcomers, calling each other big and little sisters, respectively.

“These mentor relationships are lasting, and it’s an intentional effort players established to support each other on and off the ice,” McAteer said. “As a two-time team captain, Megan has been integral in helping us foster that sense of togetherness.”

Family legacies are part of the game

To Haege and others, the influx of legacy families and sibling teammates is no coincidence. Augsburg draws families, he said, because the campus feels like a family and students know they will gain a solid education and passionate sense of vocation. Older siblings often make recruiting easy, Haege said, by “talking up the program naturally,” as they share their good experiences with siblings.

Mustafa Adam ’18 said having his younger brother, Shihab Adam ’22, on the football roster was “a dream come true.” But he doesn’t have one brother on the team. “I have 80,” said Mustafa, a two-time team captain and nominee for Mayo Clinic’s 2018 Comeback Player of the Year Award, which honors college football players who have returned to the field of play after overcoming major life challenges.

Mustafa sat out his first year at Augsburg when the cancer he beat in high school returned just prior to signing on at Augsburg. He played the entire 2016 and 2017 seasons, but the disease returned at the conclusion of his second season, in which he finished second in tackles (93) in the Minnesota Intercollegiate Athletic Conference.

He underwent chemotherapy and had to have his right ear amputated to prevent the cancer from spreading. In Fall 2018, he returned to the eld and played in all 10 games.

“I know it pained Shihab and all my teammates to see me go through this disease, but having a little brother only further motivated me to keep my head up and stand strong throughout this whole process,” said the linebacker from Wisconsin. “Envisioning the football field was truly the driving force behind my will to fight. I was willing to persevere through anything to accomplish my dream to play college ball, and my willingness to fight inspired many of my teammates to look inside themselves to find their ‘why.’ Going through this—together—has created lifelong bonds and friendships.”

“Augsburg—even beyond the field—is a tight-knit community, where everyone looks out for one another. Teachers care about your education and are always willing to provide you with extra academic support. At Augsburg, they truly care about you as an individual, and they will do whatever they can to ensure that you succeed inside and outside of the classroom.”
— Linebacker Mustafa Adam ’18, a three-time cancer survivor who studied business and economics and plans to go to medical school

Siblings and teammates keep each other on track

Nick Heenie ’19 said growing close to dozens of teammates from different states, cultures, and life experiences has broadened players’ worldview. The football team’s inclusive culture, Nick said, has inspired him to explore and appreciate Augsburg’s setting in one of the most diverse neighborhoods in the Twin Cities.

The Heenies room with brothers linebacker Xavier Hanson ’23 and defensive lineman Christopher Hanson ’19. “So our moms always know where to get ahold of us,” Frank added. Wrestling twins Aaron Wilson ’21 and Alex Wilson ’20 also share a residence, not to mention a major—biology. The two are rarely apart.

“I started wrestling in kindergarten. Alex started a year later, and we both dreamed about wrestling at Augsburg as kids,” said Aaron, whose proudest moment was being ranked nationally alongside his brother. “We knew it would make us the best versions of ourselves on and off the mat. Augsburg’s small class sizes have allowed me to make meaningful relationships with my professors and pursue research of my own.”

Lacrosse player Delaney Everett ’18 is equally ambitious, with plans to own an accounting rm. Having sister, Demey Everett ’20, by her side has pushed the mid elder to achieve in competition and in the classroom. Head Lacrosse Coach Kathryn Knippenberg has had a front row seat to the dynamic duo’s inspiring support.

“The two are in sync on the field, and their intuitive play challenges the rest of the team to follow suit,” said Knippenberg, who is in her sixth season at Augsburg. “Their majors are different—biology and accounting—but Augsburg’s impressive academic programs were able to support both their interests. Not many schools in the area offer lacrosse along with such diverse academic options.”

The Kordah brothers are a few years beyond graduation, and these stories of campus life and sibling bonds call up fond memories for the former Augsburg soccer players. Lekpea Kordah ’15 is raising two kids while working as a high school administrator and as a certified tax professional. Barinedum Kordah ’17 works in health care administration in the Twin Cities.

Adulthood keeps them from kicking the ball around together, but they do find time to talk about the “good old days as Auggies,” while they watch professional soccer, Barinedum said. Campus, he added, became home to them after their nine-member family migrated from Nigeria.

“I learned some of my greatest lessons at Augsburg. On the field, my brother taught me to never give up and to work with intensity,” said Barinedum, a defender who majored in exercise science and minored in psychology. “Coach [Greg] Holker taught us to consider details, which was tough because I wanted to just get out there and play. That study of each opponent and the game itself helped us outsmart our opponents and waste less energy than if we were always trying to beat them athletically.”

Haege knows the Kordah brothers, as most coaches and players do. That’s how it works at Augsburg, he said. Players— siblings or not—don’t only support their team, they are among the loudest fans at all Auggie contests.

Whether that sense of support stems from family connections or not, Haege doesn’t make that call. He does, however, predict the trend will continue. “Here’s to looking at quadruplets in 2021,” he joked. 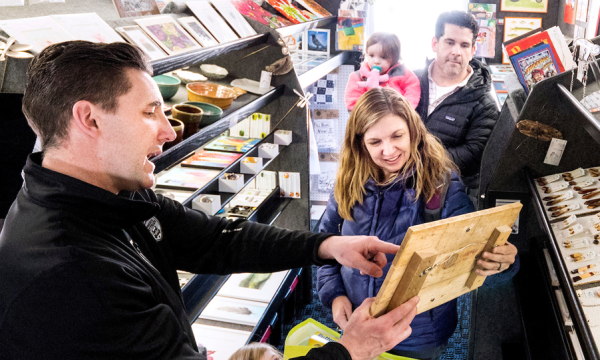 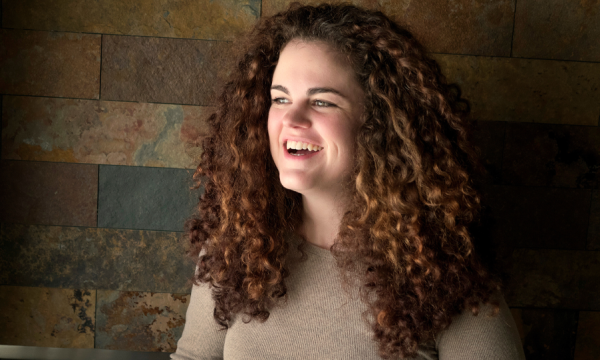 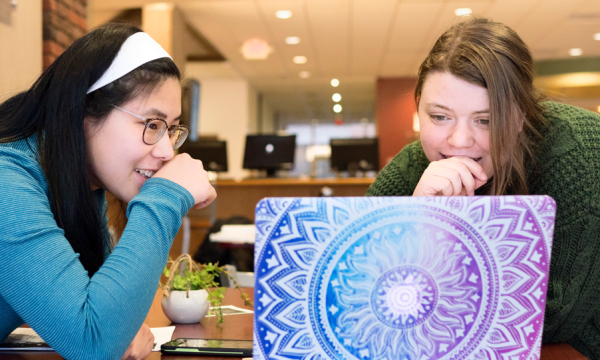