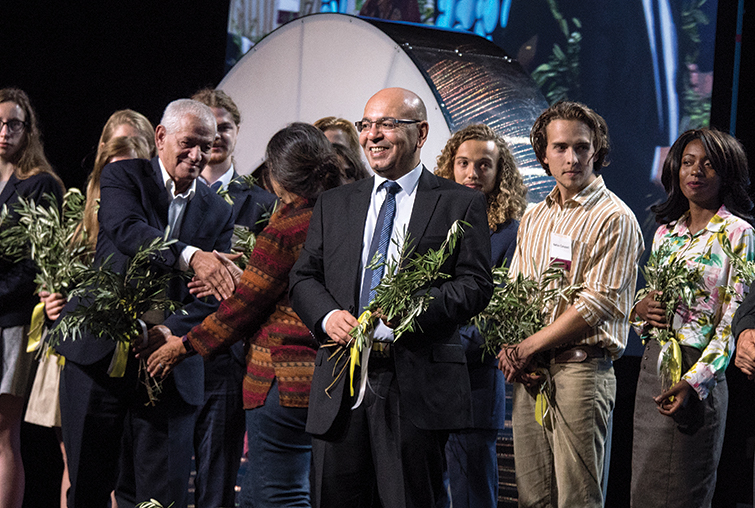 This year’s Forum kicked off with several hundred attendees filling Augsburg’s Si Melby Gymnasium to listen to the incredible, true story of the 2015 Nobel Laureates—leaders who inspired a sharply divided nation to find common ground and, ultimately, form one of the world’s newest democracies.

During a conversation presented in both English and Arabic, representatives of the Tunisian National Dialogue Quartet described an arduous and inspiring peacemaking model in which members of business, labor, human rights, and law disciplines crafted a sustaining democratic constitution through peaceful dialogue.

Recognized collectively with the 2015 Nobel Peace Prize for their contribution to building a pluralistic democracy in Tunisia following the Jasmine Revolution of 2011, the Tunisian National Dialogue Quartet is made up of leaders from four key organizations in the north African nation’s civil society. In the tense early moments of the Arab Spring uprisings, the Quartet exercised its role as a mediator and demonstrated the power of civil communication in sensitive political circumstances. Perhaps no other Forum experience better illustrated the event’s overarching theme: Dialogue in Divided Societies.

Augsburg University has served as the Nobel Peace Prize Forum’s official host since 2012, but in recent years, the event itself has taken place at several conference venues across the Twin Cities. Bringing the Forum back to Augsburg this fall gave global peacebuilders the opportunity to experience the unique, urban beauty of the University’s location and to engage with a large-scale outdoor art exhibition on display across campus.

In the spirit of fostering dialogue during the Nobel Peace Prize Forum, artists from across the United States collaborated on installations that highlighted the layered and often overlapping complexity of finding solutions to global issues. The art exhibition was curated by Christopher Houltberg, assistant professor of art and director of Augsburg’s Design & Agency program, a student-run design studio experience that teaches design thinking and problem-solving in graphic design.

One of the most talked-about installations at the Nobel Peace Prize Forum was a Hex House constructed in Murphy Square. Designed by Architects for Society, a nonprofit seeking to enhance the built environment for disadvantaged communities, the Hex House is a prototype for dignified, low-cost, flexible housing that’s easy to deploy in emergency situations. Given that the Forum dates fell just after Hurricanes Harvey and Irma brought havoc and destruction to the Caribbean, Texas, and Florida, the Hex House was a timely opportunity to see how smart design can address critical community needs.

Building peace in the greater Twin Cities, around the world

Throughout the four days of the 2017 program, attendees participated in dozens of breakout sessions led by globally recognized leaders in the fields of international development and peacemaking. Participants had the opportunity to meet and hear from national and world leaders—including Norwegian Ambassador to the United States Kåre Aas, Tunisian Ambassador to the United States H.E. Fayçal Gouia, U.S. Sen. Amy Klobuchar, and U.S. Rep. Keith Ellison. Other often-recognized presenters at the event included former congresswoman Gabby Giffords, who is seeking to end gun violence, and Barbara Bush, who founded the Global Health Corps organization to mobilize young leaders to support health equity.

The Nobel Peace Prize Forum also prompted attendees to consider local peace-building needs, convening conversations focused on present-day issues in the Twin Cities. Students, community members, and facilitators worked through difficult discussions on respecting and honoring sacred spaces, bridging political differences through civil dialogue, and addressing cross-generational injustice. These mediated conversations went beyond campus to places that brought the topics to life. For example, part of the dialogue on preserving Native American sites took place in suburban Eagan at Pilot Knob, an area that was an indigenous gathering place and sacred burial ground for centuries.

“It’s entirely fitting that these important conversations are happening at Augsburg University as part of the Nobel Peace Prize Forum,” said the Forum’s Program Director Joe Underhill, reflecting on the entire event.

“A university is a place where civic dialogue on difficult topics is not only allowed, but highly encouraged,” said Underhill, an associate professor of political science at Augsburg. “It is only through that kind of dialogue that we are going to move toward any mutual understanding on these issues.”

[Top Image]: Representatives of the Tunisian National Dialogue Quartet are joined on stage by Peace Scholars and other participants at the closing ceremony of the Forum. [Left] During a break, the 2015 Nobel Peace Prize laureates posed for photos in front of a three-story mural featuring their images along with dozens of other past laureates. 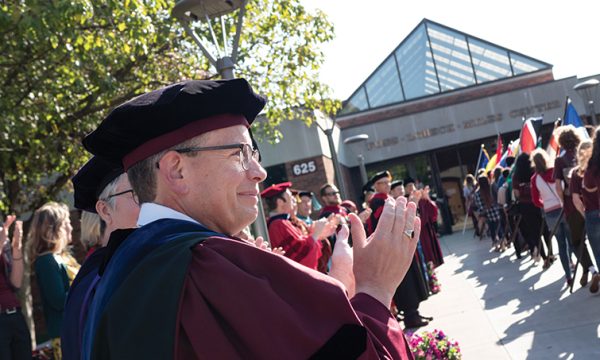 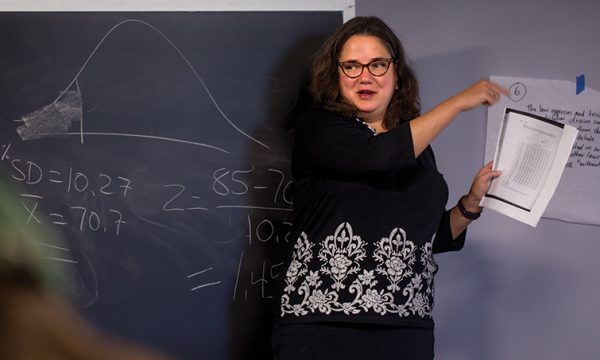 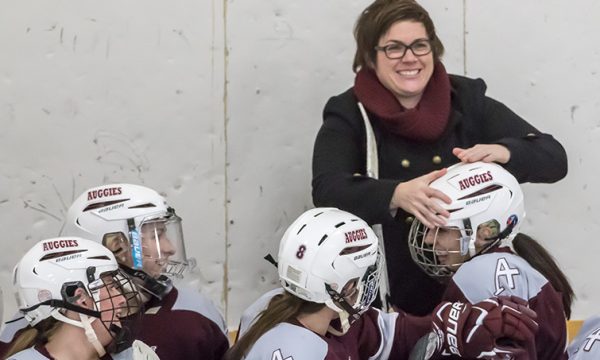