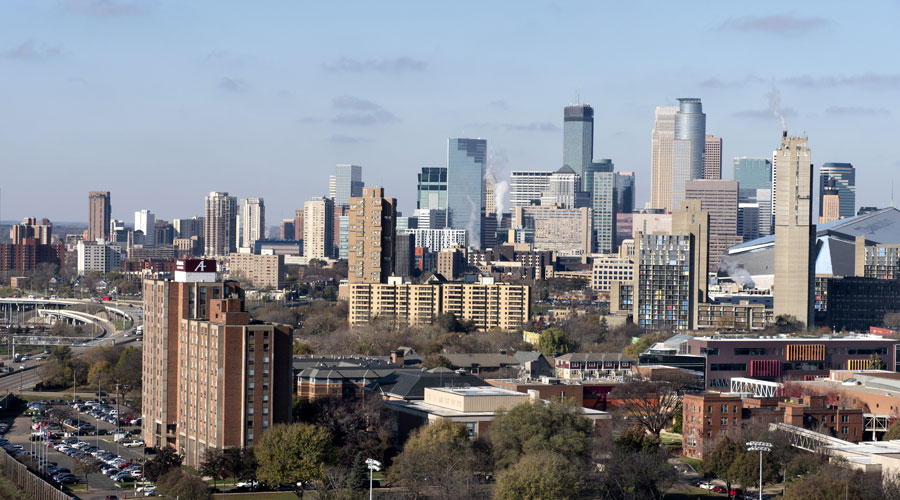 Robert Harper ’16 remembers the first time he was called the n-word.

His family had moved to Minnesota from the South Side of Chicago, seeking a better life. Since then, he’s achieved that better life, earning an undergraduate degree from Augsburg University and a master’s degree from the University of Minnesota’s Humphrey School of Public Affairs. He is now a supplier diversity director for the Minnesota State Colleges and Universities system.

“I think I’ve had a unique experience escaping poverty on the South Side of Chicago and North Minneapolis, only to be confronted with the daily decisions made by white people that only re-create those circumstances of oppression,” Harper said.

While he’s now a working professional in a state that prides itself on being “Minnesota nice,” Harper never gets too comfortable, recalling that painful moment when he was walking to middle school and a passing driver shouted the racial epithet at him. More recently, on a trip to northern Minnesota, Harper was told while visiting Gull Lake, ‘You don’t belong here,’ by a white man.

“It’s moments like that when you’re trying to do better, ‘pull yourselves up by your bootstraps,’ that society reminds you that there’s a glass ceiling for some,” Harper said.

Meanwhile, Augsburg University, one of the most diverse private colleges in the Midwest, is positioned to be a statewide leader in the turnaround, with students of color in the majority on campus after years of intentional work on diversity, equity, and inclusion. “I certainly feel that higher education is the clearest path to a middle-class life or better,” Augsburg President Paul Pribbenow said.

“Some people constantly remind you that they decide how far you go, what rooms you enter, and in the case of George Floyd, whether or not you live.”—Robert Harper ’16

George Floyd’s murder three miles from Augsburg University put an international spotlight on not only the experiences of Black people at the hands of the criminal justice system but also the reality of the disturbing “Minnesota paradox.”

That’s how University of Minnesota Professor Samuel Myers describes how Minnesota has such a high quality of life and a history of progressive politicians but is one of the worst places to live for Black people.

“Measured by racial gaps in unemployment rates, wage and salary incomes, incarceration rates, arrest rates, home ownership rates, mortgage lending rates, test scores, reported child maltreatment rates, school disciplinary and suspension rates, and even drowning rates, African Americans are worse off in Minnesota than they are in virtually every other state in the nation,” Myers said.

The numbers illustrate the bleak story:

Meanwhile, between 2010 and 2018, the fastest growing racial group in Minnesota was the Black population, which grew by 36%, adding more than 96,500 people.

Many are immigrants but face the same backdrop of a state that hasn’t historically acknowledged that discrimination plays a role in the Black story here, Myers said.

“When it comes to race in the Twin Cities, in Minnesota, there was this instinctive belief that we already know what the problem is, that it’s not really a problem, and since it’s not a problem, we don’t need to find answers,” Myers said.

The COVID-19 pandemic compounded the inequities. The unemployment rate for Black Minnesotans in the aftermath of pandemic shutdowns rose to 15.3% last July, up 9 percentage points from a year earlier, versus 6.3% for white workers, the Minnesota Department of Employment and Economic Development reported. According to a Pew Research report published in December: “Among Black Americans, 71% know someone who has been hospitalized or died because of COVID-19.”

The path to today’s Minneapolis

High profile police killings of Black men in this region—including George Floyd, Philando Castile, and Jamar Clark—have heightened the protests and urgency for change. The viral video of Floyd’s murder with his neck under the knee of a Minneapolis police officer seemed to dawn a new era in the fight for justice.

Protesters took to the streets for weeks around the globe. Graffiti images of Floyd sprang up worldwide, even on a West Bank barrier in the Middle East. CEOs of Fortune 500 corporations in Minnesota wrote an open letter of outrage. Athletes of all races took the knee before matches to show their support for racial equity.

In the city of Minneapolis, at the center of the controversy, there was swift action against the officers, something unprecedented.

“Despite decades of police incidents that resulted in the deaths of people of color, today’s actions by the mayor represent the first time in modern history that Minneapolis police officers were fired within 24 hours for unjustly murdering a citizen,” said Michael Lansing, associate professor and chair of Augsburg’s history department, in a May 26 series of tweets about the Minneapolis Police Department. (Lansing’s comments on the history of uprisings and Minneapolis police were also carried by The Washington Post and Mother Jones.)

Now, many are acknowledging the systems that are behind today’s Minneapolis. Even the South Minneapolis street where George Floyd was killed is in a historically Black working-class and middle-class neighborhood created by housing segregation, Lansing said in his tweet series.

Indeed, Mapping Prejudice Project, a team of community members, geographers, and historians based at the University of Minnesota, have unearthed thousands of racial covenants in Minneapolis that reserved land for the exclusive use of white people.

While contemporary white residents of Minneapolis like to think their city never had formal segregation, those racial covenants did the work of Jim Crow in the Twin Cities, said Kevin Ehrman-Solberg ’15, a co-founder of Mapping Prejudice.

“The reputation of Minneapolis is that it’s a liberal bastion, yet there’s a racist reality that people live in.”—Kevin Ehrman-Solberg ’15

Looking forward with a pragmatic lens

While the period following George Floyd’s murder looked like a change moment, Augsburg University’s M. Anita Gay Hawthorne Professor of Critical Race and Ethnicity Studies William Green worries that the momentum started to diminish as the summer progressed. “The challenge that we face is to do the hard work to define what change means, and second, how to get at the root of the problems that lead to disparities in society.”

Minneapolis Chamber of Commerce President Jonathan Weinhagen looks ahead to the one-year anniversary of George Floyd’s murder and to the question of how much progress has been made in raising awareness about and working to eliminate the disparities experienced by people of color.

“[Closing the racial divide] is not going to be resolved in a year. It’s going to take more time, but it’s going to have to be far more rapid than anything we’ve done to date.”—Jonathan Weinhagen

The implications of these disparities are wide-reaching, with government officials and the business community concerned that a growing population that isn’t able to fully participate in or benefit from the economy will threaten the vitality of the state as a whole.

“To have a large and growing part of our economy be marginalized is a huge disadvantage to all of us because it takes a huge part of the population out,” said Susan Brower, Minnesota’s demographer.

The role of education

Many are looking to young people to be the lasting change.

The nonprofit Generation Next in Minneapolis has emerged to support children from “cradle to career,” envisioning a future in which “every child has the academic, social, and emotional skills to thrive in a globally fluent world.”

Alan Page, retired Minnesota Supreme Court justice, and Neel Kashkari, president of the Federal Reserve Bank of Minneapolis, proposed in 2020 amending Minnesota’s constitution to give every child a civil right to a quality public education. They define the current approach as a system that works well for children from well-to-do families but fails children from low-income families.

“A quality education is without question the most powerful tool we have to break the cycle of poverty and create a society in which everyone can fully participate,” Kashkari and Page wrote in the Star Tribune. “It doesn’t just change one child’s life. It has the potential to improve the future for generations to come and lead to a more productive, vibrant society for all of us.”

Meanwhile, Augsburg University is positioned to be a statewide leader in the turnaround, with years of intentional work on diversity, equity, and inclusion. “I certainly feel that higher education is the clearest path to a middle-class life or better,” Augsburg President Paul Pribbenow said.

Despite Harper’s success after graduating from Augsburg, he views the disparate outcomes as a call to action, even forming his own economic development consulting firm, R.D.T.H Consulting, LLC, focused on social impact in addition to his day job. “It doesn’t have to be this way.”

Augsburg’s efforts to address disparities and work toward equity

After the murder of George Floyd only a few miles from campus, Augsburg University introduced in June the Justice for George Floyd Initiatives to focus on working to heal the community, creating leadership and structures that make tangible change, and ensuring accountability for the work of undoing racist systems.

New efforts were introduced to combat systemic racism, including a critical race and ethnicity studies department; diversity, equity, and inclusion training; and a requirement that all faculty and staff complete antiracism training. Augsburg also canceled classes and suspended operations June 4 and 5 so students, faculty, and staff could have an opportunity to grieve.

“We acknowledge the pain, fear, and trauma faced by the Augsburg community—especially our students, faculty, and staff of color—remain a lived reality every day,” Pribbenow said. “This work by Augsburg will be persistent, resolute, courageous, and integrated into everything the university does.”

These moves are an important continuation of Augsburg’s efforts to build and maintain an equitable and inclusive campus that became a strategic focus in 2006, resulting in Augsburg welcoming its most diverse incoming first-year class ever in 2017. Students of color are now in the majority of traditional undergraduates, making Augsburg one of the most diverse private colleges in the Midwest.

Top Image: Minneapolis is a city with a liberal reputation, but racial disparities persist. (Photo by Courtney Perry)


Tags: Class of 2015Class of 2016Diversity and InclusioneconomicsFacultyWinter 2020–21
PREVIOUS POST

What it takes to fight a pandemic: Research and health care (Part 2) 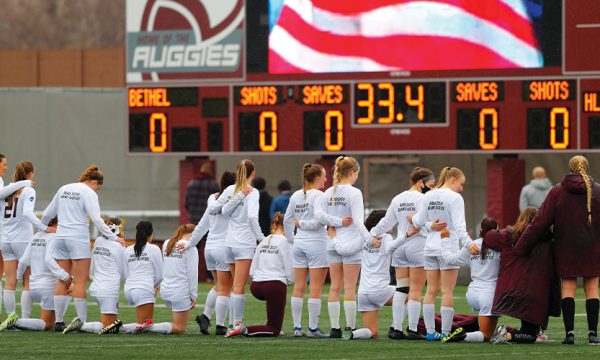 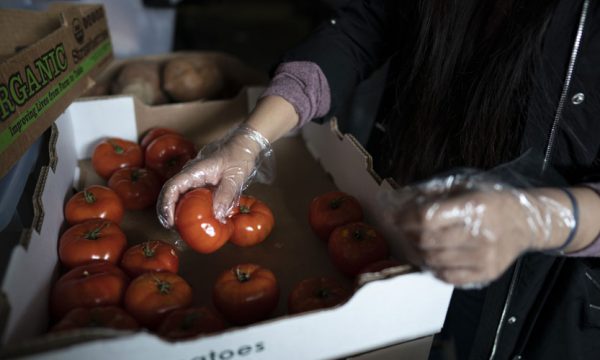 What it takes to fight a pandemic: Community collaboration and mutual aid (Part 1) 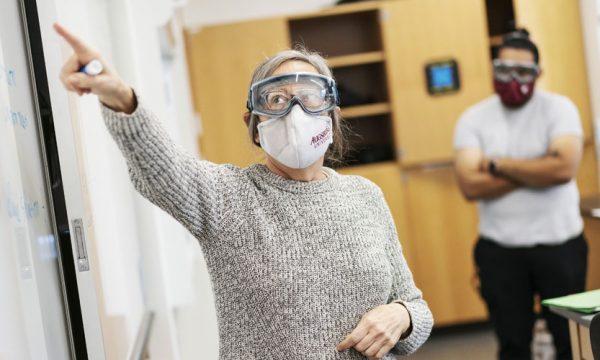 What it takes to fight a pandemic: Research and health care (Part 2)