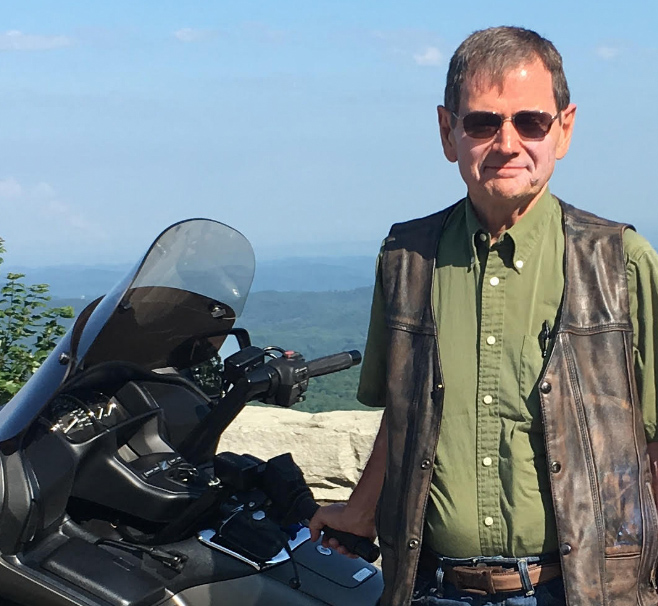 Program Committee, European Conference on the Impact of AI and Robotics, Oxford England

Motorcycling the History of American Ideas

My father’s family comes from the Appalachian hills of Tennessee and includes some Cherokee ancestry. If my grandfather had downed enough Tennessee moonshine, in fact, he was certain we had Davy Crockett, mythopoeic woodsman, Congressman, and Texas hero, as an ancestor. Tennessee culture, history and, of course, bluegrass music are important to me as a descendent of the Irish, English and Cha-la-kee, “those who live in the mountains.” When we opened my great-grandfather’s Civil War chest some years ago (he was 57 when he fathered my grandmother who lived to be 102), we discovered a dark blue army uniform. Despite the “Trail of Tears” produced by the brutal Indian Removal Act of 1830, this mountain man fought to preserve the Union.

K-12 school years took me abroad to Pordenone Italy, Frankfort Germany, Ponta Delgada Portugal, Tripoli Libya, Tachikawa Japan, and Honolulu Hawaii. I learned to love motorcycling in Japan. Quite illegally, since I was only 15, I motorcycled much of Honshu. My most memorable experience was listening to a Japanese shopkeeper tell me, with haunted eyes and pursed lips, of the “light.” It took me a while to understand, as his daughter struggled to translate, that he meant Hiroshima and Nagasaki. In his drawn, unforgettable face, history became incarnate.

As an avid motorcyclist, I love to ride wherever I can but most love the verdant lands of Appalachian Tennessee, rich in history, music, and mountain lore. Rides have taken me east to Jonesborough, TN, home of the International Storytelling Conference which draws thousands each year; south to Oxford, MS, where “Ole Miss” sponsors esteemed literary conferences; and much further south down the irenic, pastoral lanes of the famed Natchez Trace, an old whiskey-running trail traversing the 400 miles from Nashville nearly to New Orleans. Of course, the South has a rich, tragic history, which may account for its great writers, outstanding architecture, and world-renowned music. Think William Faulkner, Sewanee University, and Muddy Waters.

As a result, my heart belongs to the mountains of Tennessee even as my mind belongs to Minnesota, where I took my Ph.D. in philosophy with a supporting area of computer science. My perennial computer science question is “Is artificial intelligence possible?” while my principal philosophical question is “How much can we justifiably claim we know?” More specifically, does computing and its obvious human constructions push us in in the direction of philosophical pragmatism? As computer simulation permeates the academic enterprise and we are overwhelmed by data, the answer seems increasingly obvious. Indeed, since joining the Augsburg faculty in 1985, I have had the academic ride of my life, relishing such beguiling questions, getting to know many fine students, and teaching in and directing the Honors Program.

Additionally, I have a Master of Divinity degree and served an Episcopal parish, St. Mary’s, near Afton, MN, part-time for ten years. It is an experience I will long cherish. Life in human community shaped by religious tradition is immensely rewarding but also academically limitative–namely, can we claim we have academic answers to serious life questions?  When I tell people I teach computer science, philosophy and religion, it usually produces a pained facial expression, then, after a moment, a puzzled laugh, and finally an engaging conversation about artificial boundaries.

My wife Cheryl is an Auggie, professionally an editor who has edited many books and articles, and a volunteer for Augsburg. She rides behind me on my hot-rod Gold Wing F6B, offering sage advice that keeps me from riding into the weeds, literally and metaphorically. Or, when we travel to conferences, she keeps me from boarding the wrong train and gets me to the places worth seeing, such as the Berlin Wall or Canterbury Cathedral. Much of my publishing success, in fact, I owe to her.

I have two children, Kelsey who graduated from Augsburg in 2006 and Carmen who took her MBA in 2012, and one grandson, Mason Avery, born in 2020.

Given my reluctance to settle into any narrow vantage point, I view the heart of the academic enterprise to involve ideas that matter rather than training in the currently fashionable. This is a challenge since I relish technology, computer games that simulate virtual worlds, building beguiling web pages, and philosophical discussions of artificial intelligence. But such trendy topics provide an accessible gateway into classical philosophical problems, such as how we know, how we should live, and whether human life is finally significant in a vast universe.

My hope is that students will learn how to be students for life and hence be better prepared to meet the daunting challenges we face. I like to think of myself as a teacher of skilled improvisation or, in more Mississippi Delta terms, “academic jazz.”

One fruit of the collaboration between computer science and philosophy at Augsburg is its Computational Philosophy major. Devised a few years ago, it enables students in computer science to reach some philosophical sophistication and students in philosophy to acquire some immediately employable skills desired by employers. The two disciplines have more in common than is usually assumed, given, for example, the growing importance of artificial intelligence in a variety of areas, most notably in the handling of the massive amounts of data increasingly facing all institutions.

I have published two books, Universal Assembly Language (McGraw-Hill) and The Turing Test and the Frame Problem (Ablex), and was part of a committee which produced a third, Teaching and Learning in Honors, published by the National Collegiate Honors Council.  TTFP’s subtitle, “AI’s Mistaken Understanding of Intelligence,” implies that artificial intelligence, for all its recent success, simply shows that tasks we previously imagined require intelligence in fact sometimes yield to clever computational techniques. It has been cited 71 times in refereed publications. Teaching and Learning in Honors was the most purchased monograph in the history of the National Collegiate Honors Council.

A new area of research for me is the relationship of computer games, simulation in science, and education. I presented a paper in Berlin, October, 2014, at the 2014 European Conference on Games Based Learning (ECGBL), which explored the relation of computer games to the computer science concept of user illusion, the psychological concept of flow, and the epistemology of user interfaces. In fact, I have been on the Program Committee of ECGBL for several years now. The ECGBL draws hundreds of participants from around the world.

At the 2015 ECGBL, I presented a new paper, “Failure’s Paradoxical Relation to Success: What Games Can Teach Us that the Academy Misses,” in Steinkjer, Norway, Oct 8-10. It argues that coming to terms with failure is a critical part of collegiate education that colleges and universities badly misunderstand. The paper was published in the conference Proceedings, and more recently in Case Studies in Games- Based Learning-Volume 1, edited by R. Munkvold and published by ACPI Press, Reading, United Kingdom.

Summer 2016 saw me present a new paper, “‘In Science There Are No Depths; There Is Surface Everywhere’: Surprising Parallels Between Rorty’s Descriptions and Wolfram’s Simulations,” at the Pragmatism and the Brain Conference, University of North Carolina, Asheville, June 2-4, 2016. The thesis of the paper is that computing and complexity studies reinforce Rorty’s views in ways he could never have anticipated. I am preparing it for submission to the journal Contemporary Pragmatism.

Fall of 2016 took Cheryl and me to the University of the West of Scotland, South Lanarkshire, UK, for ECGBL’s 2016 Conference, where I presented, “‘Easy to Learn, Difficult to Master”: Accessible Front-Ends to Challenging Science Assignments.” The paper takes on the celebrated game-program Eterna, which enables non-science gamers to assist with researching the RNA of tuberculosis, which is becoming resistant to treatment.  It is therefore a critically important research game simulation, my paper argues, but its inaccessible front end makes it needlessly difficult to learn. It was published in the conference Proceedings. 2017 took us to the conference in Austria and 2018, the conference in France.

Another area of research is science and religion, from a computer science perspective. More specifically, I am interested in the interplay between computer science, religion, pragmatism, and narrative. Consequently, I have written and refereed for Zygon, the world’s leading religion-and-science journal. The paper is entitled,“The Serpent’s Trail: William James, Object-Oriented Programming, and Critical Realism.”  I believe science is a human construct, designed primarily to solve problems we find pressing, but so is religion. Once we entertain this alternate way of understanding them, our conversations can be more productive.

My most recent conference affiliation is the European Conference on the Impact of AI and Robotics (ECIAIR), based in Oxford England. I am on the Program Committee for this conference, with specific responsibility for the application of artificial intelligence to ethical and political issues. It is associated with ACPI Press, Reading, and Oxford University, UK. I have had two papers accepted by this conference, “AI Ethics: The Thin Line Between Computer Simulation and Deception” (2019)  and  “All AI’s Are Psychopaths”? Reckoning and Judgment in the Quest for Genuine AI” (2020).

Grants, Awards and the Honors Program

Early in my career, I received a Rockefeller Fellowship for a year of graduate training at Princeton. I have been selected for an “Honored Faculty Award” three times by the senior class at Augsburg after receiving an Outstanding Teaching Award at an earlier institution. I have received two National Science Foundation Grants, one for a major upgrade to the Honors Program; a Templeton Teaching Prize in Science and Religion (with Bruce Reichenbach); an ELCA summer study grant, University of the South; and two Innovation Fund grants from Augsburg.

I had the pleasure of directing the Honors Program at Augsburg for 16 years and the program received a National Science Foundation Grant while I was Honors director.