What is Advent Vespers? That’s what Sesquicentennial Co-Chair Darcey Engen asks Sonja Hagander to describe in this video.

For four decades, Augsburg University has ushered in the Advent and Christmas seasons with Advent Vespers, a magnificent experience of music and liturgy, focusing on the theme of preparation and culminating in the joyful celebration of the Incarnation. 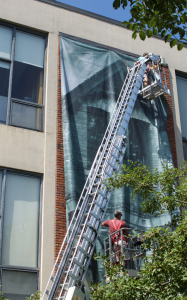 Looking through windows—and sometimes full-scale building scrims—throughout campus, we see how our landscape, architecture and people have changed in the last 150 years.

Here’s a guide to what you’ll see around campus:

Locations and content for the building scrims:
Christensen Center facing Murphy Square
Morton Hall: Built in 1888, this duplex was a faculty residence until the early 1920s, when it became a women’s dorm. It was named Morton Hall in 1932, in honor of Augsburg’s Dean of Women, Gerda Mortensen. Demolished in 1959, the façade’s terracotta face was saved and is now in the Christensen Center entrance.

Sverdrup Hall, facing library and Hagfors
Original Main: Augsburg’s original main building in Minneapolis opened September 15, 1872. Within three years, it was expanded to include a large central section and a smaller wing (identical to this one) at the east end. At first, everything happened in this building: classes, chapel, library, dining, and residence space for students, faculty, and their families. After Old Main opened in 1902, this building became a student residence and dining hall. This oldest section was demolished in 1948 to make room for the Science Hall, and the rest of the building came down in 1949 to create space for Sverdrup Library.

An interview with Martin Olav Sabo ‘59, whose rise to politics was supported by Augsburg University students, is expected be available this fall at the Sabo Center for Democracy and Citizenship website.

A link to a shortened version of the interview, with closed captioning and video description, should be available this fall. Chair of Political Science and Sabo Fellow Andy Aoki successfully applied for an Augsburg Sesquicentennial Faculty Project award to pay for the closed captioning and video description that was required to be able to post it online.

Let’s celebrate the faces of current and historic members of the community with this ambitious “Inside Out” public art installation that Augsburg has commissioned as part of the sesquicentennial.  Your face could be part of the finished product that starts going up on campus this summer.

Led by Kristin Anderson and Christopher Houltberg, this is a participatory art project that will cover four city blocks and showcase hundreds of faces of people who are part of the Augsburg community. An “Inside Out” photographer has been at many events so far, including Commencement, to capture the faces of Augsburg community members willing to pose.

Woven together, each black and white portrait will create a mesh of faces celebrating, recognizing and honoring the core of the institution: its people. This textile of woven portraits will be a unique opportunity to take part in an international art project empowering community actions.

The best poetry and fiction by Augsburg students will be featured in “Murphy Square 1975-2015: An Anthology of Creative Writing by Augsburg Students,” to be published next year in honor of the sesquicentennial.
This volume will provide an overview of some of the best poetry and fiction from the Murphy Square Literary and Visual Arts Magazine, the university’s longest-running student-led literary publication established in 1974.
English professor Doug Green and 40 students from recent creative writing keystone classes will select and edit the anthology. The volume will be available both in print and online, so that selections can be shared digitally at university events, celebrations, and reunions.

Registration for the Sesquicentennial Gala on September 27 at The Depot in Minneapolis has closed and a waitlist has been opened.

If you are interested in being added to the waitlist, please follow the registration link and add your name to it.

You’ll be informed as soon as possible if tickets become available.

Wonder what the lights and cameras are about? The Famous Group is shooting two videos at Augsburg that will debut at the Sesquicentennial Gala on September 27.

The “Origins” video will tell the story of the university’s past, present, and future. The “People” video will celebrate distinction among current students as well as alumni.

These videos will be shared during other events at Augsburg and will be available at this Inside Augsburg Sesquicentennial Planning site in fall.

Need more information about the upcoming Sesquicentennial celebration? Want to make sure that we know about something key from Augsburg’s history that we might want to celebrate?

The Submit Your Questions form at Inside Augsburg Sesquicentennial Planning is where you can ask questions and share feedback.

Please share your ideas, thoughts, and/or questions with us here.

In the early years of the social work major, students from St. Olaf College joined Augsburg students in the 1970s to live in a version of a “Jane Addams house” on campus and concentrate on urban field work.

Similar milestones will be documented in a history of social work timeline, one of the faculty-led projects to celebrate Augsburg’s upcoming 150th anniversary. This visual timeline will examine how social work has impacted Augsburg, the surrounding community, and the profession of social work.

The timeline is researched by Professor Emeriti Anthony Bibus who identified documents, interviewed previous faculty and students, and searched for photos to mark the important milestones.  A student, marketing major Chendamonee Hing, is developing a digital version of the timeline that will become a visual display.  The timeline will be unveiled in the winter of 2020 at an alumni gathering and will be transportable to various events.

The timeline starts in the 1960s when social work begins in the sociology department with the help of Joel Torstensen and Paul Steen.  The major was created in 1974 – and began as a joint program with St. Olaf.  Also documented is the launch of the Master of Social Work program in the 1990s. Highlights include the development of international study options, curriculum developments such as Intergroup Dialogue, and the growth of the program over the years.

Here are some of the signature events so you can start planning for this historic year.