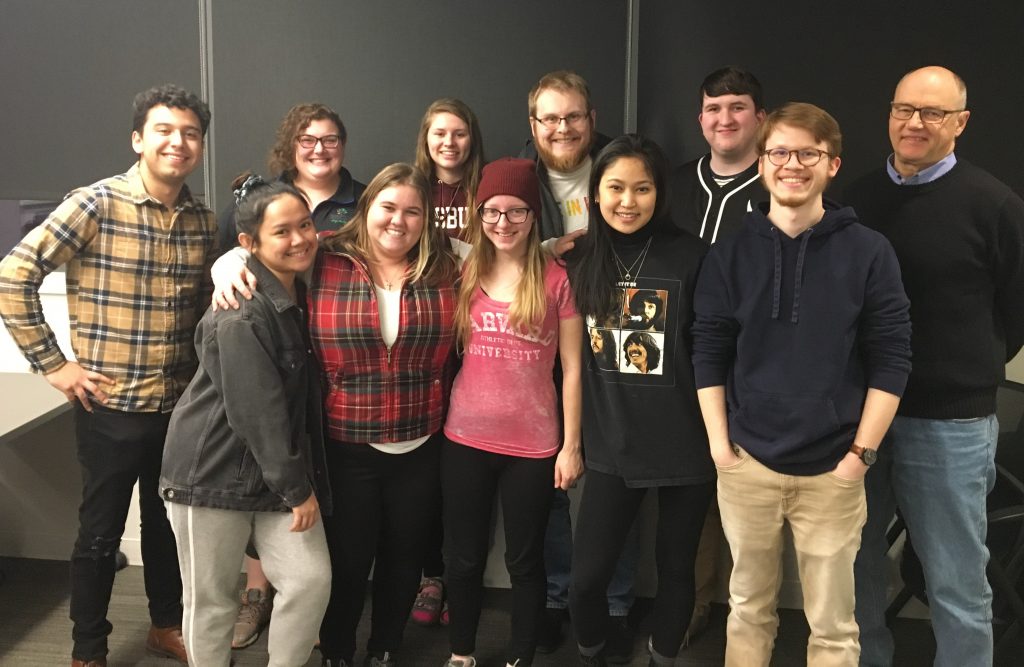 Augsburg has shown me how to engage with my community in a way that is productive, engaging, and meaningful to its members. I choose to be a Christensen Scholar to explore my vocation through discussions revolving around academia, service, and the world.

Augsburg has challenged me to step out of my comfort zone by serving surrounding communities near Augsburg. Not only did I gain new leadership skills, but I’ve also built meaningful relationships that I can reflect on years from now. My connections with community members, students, faculty members, advisors, and staff members have taught me how to interact with people from all walks of life. Being a Christensen Scholar provides me with an opportunity to explore my faith and my vocation, two things that are constantly changing and growing.

The most important thing that I have learned at Augsburg is to put your heart into everything that you do. Not only will you get more enjoyment from the classes and activities you participate in, but so many more doors will also open to you. From doing this I have created so many connections outside of Augsburg and have surrounded myself with people with goals and aspirations that are like my own. I chose to be a Christensen Scholar because of the opportunity to discuss religious topics in a small group setting. In this setting, everyone is able to share their ideas and a true discussion can be had.

I’ve now been at Augsburg for three semesters and I’ve learned so much about myself, and about others.  At Augsburg, I have learned what it means to live in a community. I’ve also learned so much about different cultures and their beliefs. It also has got me thinking more about my own culture, too. I chose to become a Christensen Scholar to learn how I can help be a leader on campus and be a good role model in my community. Another reason why I chose to become a Christensen Scholar is meeting other people that are also passionate about their faith too.

I have learned a great deal about the world around us at Augsburg. Some of the most fascinating things that I have learned are about religion. Augsburg has given me insight into the religious practices and beliefs of different groups of people. Having an informed understanding of the world and the people in it helps build relationships and communities. I wanted to participate in this program to keep learning and growing both in my faith and as a person. Faith has always been a large part of my life, but as an LGBT person, it’s also been something that I’ve struggled with. It took me years to come to terms with my identity both as a Christian and a lesbian. Even now I’m bombarded with messages from the media and even family members saying that I have to choose between identifying as one or the other. This hasn’t driven me away from Christianity but has instead furthered my resolve to learn more about my religion. The Christensen Scholars Program was an opportunity for me to continue doing this.

Augsburg has taught me to be a more independent and critical thinker. I chose to be a Christensen Scholar because I wanted to discuss social and ethical issues while expanding my understanding of the world through the lens of faith and vocation.

At Augsburg, I have learned to be a well-rounded scholar as well as an individual. It has been essential in my ever-changing journey to become a better person. I became a Christensen Scholar to challenge myself to not only become a better scholar but a better Christian. So that I can better serve and guide my community.

I have learned the importance of creating and executing ideas for change and ministry with many diverse people at Augsburg. I am a Christensen Scholar because it allows for a place of dynamic conversation regarding theology in literature, history, the arts, and really enhances the way that I perceive God in the context that Augsburg is in.

I’ve learned a lot about myself and my place in this world while being at Augsburg. I chose to be a Christensen Scholar because I wanted to make some more meaningful connections on campus and having a small group of people to have serious conversations with was something I wanted to seek out.

I have learned a lot throughout the years at Augsburg. I have become more aware of my values and goals as an individual, and with the experiences and skills I have developed I would like to bring that back to my community and my people back home in Malaysia. I have initially chosen to be a part of the Christensen Scholars because it was suggested by one of my closest friends. But as I was going through the application and getting more information about it, I realized that it is a great way for me to engage in my faith and spirituality and also being critical of the current issues that are going on around Christianity in a more global context.

Learn more and apply for the Augsburg Youth Theology Institute