While we wait for the Minnesota landscape to more fully thaw out this chilly spring, let me share a memory with you from a much warmer spring day several years ago…

My precocious three-year-old daughter and I were en route between errands, stopping for a quick cup of coffee and goodies, when Marie spotted a giant dragonfly on the sidewalk. We squatted down to investigate. I cautioned her to move slowly so we didn’t scare it away, but her sticky little fingers were already reaching out to touch the creature. It didn’t move.

“Oh honey, it looks like it’s dead. See the owie?” I said, pointing at its mis-shaped and slightly oozy side of head.

“I don’t know sweetie. But look how beautiful it is. Look at its lacy wings, look at the bright colors on its body.” 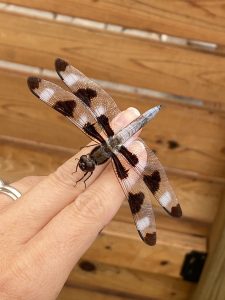 “Well, maybe a momma bird will pick it up and feed it to its baby birds so they can grow big and learn to fly.” I picked up the dragonfly and placed it in the grassy median nearby. I continued, “Or it will go back to nature in the grass here and make the dirt healthy so plants can grow.”

Thanks to Marie’s discovery and observations of the dead dragonfly several years ago, I now find my senses awakened anytime I see a dragonfly. Spotting the black and white iridescent wings of the 12 spotted skimmer or the vibrant green stick body of the ebony jewel wing stirs a hint of exhilaration within me. These sightings have become small but holy moments. They point me back to the complexity and simplicity of Marie’s interpretation of the promise of life present in the dead, lifeless body of that dragonfly.

While our chilly Minnesota winter hasn’t made room for any visits yet from these fascinating flighted creatures, they have been on mind this Easter.

To be candid, Easter has always been uncomfortable for me. Back in my youth ministry days, that mostly had to do with the fact that I’d start my Easter Sunday at 6:00am in the church kitchen preparing food with sleepy students for our church’s Easter breakfast youth fundraiser. But over the last few years, I’ve simply struggled to connect with the joyful celebration of Easter worship. The Hallelujah chorus and triumphant shouts that “Christ has risen indeed!” have landed flat for me. Disingenuous seems too harsh of a label, but something has remained amiss for me with the Easter proclamation when life around me – or rather the devaluing of it – seems to reflect something far from the truth of this promise.

However, I’m happy to share that I in fact heard good news this Easter weekend. Real good news that landed deep in my body and bones. It landed, like a dragonfly – light, brief and beautiful – before moving on out of view. This good news was proclaimed not in Sunday worship, but through the words of Jewish rabbi and scholar, Avivah Zornberg, interviewed on Krista Tippet’s On Being podcast. She spoke of the Passover story our Jewish siblings have been gathering around, remembering and retelling this spring season, as Christians have been moving through the story of Holy Week. Both stories recount how God sees and hears the cries of the people and responds boldly. Both stories demonstrate how God provides another way, in the face of a world where humans too often are hardened and exploitative towards one another. Both stories speak of the redemption God interjects into our mess.

In Avivah’s retelling of Israel’s exodus from Egypt via the parting of the Red Sea, she reminds us that this miraculous salvation of Passover was simultaneously shrouded in death. After the plagues push Pharoah to release Moses and the Israelites, Pharoah soon changes his mind and sends his army after the Hebrew people. Soldiers, horses and chariots charge towards their own death as they enter the parted waters, only to be swiftly swallowed up by them. Avivah imagines what it must have been like for the Hebrew people – hastily fleeing their homes, barely comprehending the salvic actions God is unfolding before them, journeying across the dry land of the ocean bed with their oppressors in hot pursuit, and then witnessing their perishing as the waters take over the army and drown them in sea.

The celebratory song attributed to Moses in this Exodus account is often thought of as the celebration and thanksgiving of the people, sung after crossing the sea.  Their feet planted firmly on the other side, claiming their freedom, finally. But Avivah points the reader to look more closely at the text. There is a version of the midrash that suggests in fact that the people sing this song of thanksgiving while they are still crossing the sea – while witnessing death and destruction around them and only sporadically able to glimpse the salvation that lies ahead, on the other side of the parted waters. Aviviah says,  “…if one looks closely at the text, one can see that it says ‘as they were walking in the midst of the sea on dry land.’ If one imagines it as people still in that rather menacing corridor, which they know can collapse because it just has, behind them, then the song becomes a different song. And it’s a song of human beings at the edge, between death and life — celebrating life, but at the edge.” Their reality is one of uncertainty. And she says, in this troublesome but pivotal moment, they choose to hope in the fragile promise of life.

God’s redemption remembered in the Passover story, helped me celebrate the hope-filled Easter promise more wholeheartedly this year. Singing the hallelujahs from the places where life and death reside together feels right to me. I can be here – in this unsettled place.

Death. Resurrection. Pain. Healing. Loss. Redemption. These are not binary concepts. They coexist. Together they are one thing. Together, they embody the fullness of God, as best as I can tell. The Easter message of new life is an empty promise without the realities of Good Friday’s devastating death. The promise of God’s redemption will never be detached from the harsh realities we need redeeming from. 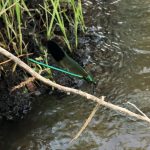 I don’t know if this truth is always as obvious as it might be with dead dragonflies. There is lots of death that would appear to just be death. Death where the hope of resurrection is hidden, buried deep beneath. Beneath the absurdity of students gunned down in classrooms. Beneath the senselessness and tyranny of genocide and war. Beneath the ignorance and racism taking the lives of black and brown bodies. Beneath the lies of depression that convince young and old their lives are not worth living and their beings are not worth loving.

We prefer to skip past the death, the places of pain and pressure, if we have the convenience to do so. But we shouldn’t. We should stop and pay attention. We should try to see and enter the world in all its mystery. In all its beauty and in all its sorrow. Often the moments are one in the same.

The dragonfly will come back to life, but just in a different way. I chose to hope in that mystery and allow it to call me into the unsettled places, trusting God is already there and already at work.