This reflection has been written by Amanda Vetsch who works as the Congregational Coordinator of the Riverside Innovation Hub and has recently completed her Master’s theses which focused on dismantling white supremacy, the church, and Lutheran theology. 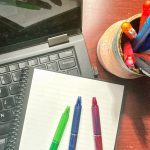 The staff of the Riverside Innovation Hub have recently spent time reflecting on the list of “White Supremacy Culture Characteristics” written by Tema Okun to better understand how the characteristics of White Supremacy show up in ourselves, our initiatives, communities, and institutions. Some of the staff attended a webinar co-hosted by Showing Up for Racial Justice (SURJ) and Tema Okun to mark the 20th anniversary of this list and to begin the launch of new website and updates to the list of characteristics of white supremacy.

The phrase “white supremacy” often brings to mind images of burning crosses and the KKK. This association isn’t necessarily wrong, yet it isn’t fully accurate or entirely helpful. According to Layla Saad, the author of Me and White Supremacy, “white supremacy is the racist ideology that is based upon the belief that white people are superior in many ways to people of other races and that therefore, white people should be dominant over other races” [1] This ideology is baked into institutional structures, systems and bodies. In white-centered societies, like the United States, white supremacy is as common and permeating as the air we breathe. As Kyle “Guante” Tran Myhre says in his poem titled “How to Explain White Supremacy to a White Supremacist,” “white supremacy is not a shark; it is the water.” [2] When White supremacy is understood as an abstract concept, or an extremist ideology, it is easier to distance oneself from it, and remain blissfully ignorant to the deadly, daily realities of white supremacy. When we begin to understand the commonness of white supremacy, it becomes more difficult to shift the blame to other people and it requires us to wrestle with our complicity in it. White supremacy must become better understood if it is ever going to be dismantled. And who should be responsible for dismantling the systems, institutions, and ideologies of white supremacy? The burden of this labor should lie on the shoulders of those who built, sustained, and perpetuated it, white people and predominantly white institutions.

Tema Okun used her experiences from facilitating and participating in antiracism workshops, her learnings from being in community with other leaders and thinkers, and her frustrating experiences at a workshop to write up a list that describes the characteristics of white supremacy culture. The list names some of the norms and expectations for people living in a white supremacy culture. Tema Okun articulates fifteen of these norms and expectations, or characteristics: Perfectionism, Sense of Urgency, Defensiveness, Quantity Over Quality, Worship of the Written Word, Only One Right Way, Paternalism, Either/Or Thinking, Power Hoarding, Fear of Open Conflict, Individualism, I’m the Only One, Progress is Bigger, More, Objectivity, and Right to Comfort. [3] She offers examples of the characteristic and antidotes to the characteristic. This list is by no means exhaustive, in fact, over the last 20 years, the author, Tema Okun has further clarified and added updates to the list of characteristics. This list is helpful as a guide or reference key to hold in our minds as we try to name the ways that white supremacy manifests itself within ourselves, our communities and institutions.