As a way of teaching congregations how to engage their neighbors and neighborhoods, we introduce them to a method we call the Public Church Framework. This framework consists of four movements including accompaniment, interpretation, discernment, and proclamation. These movements bleed into one another and collectively are cyclical, or a spiral, in that they are never completed but rather lead to further and deeper practice of these movements. We like to think of this framework as descriptive of what we do when we are attentive to God and to our neighbor rather than prescriptive of some “one true way” to be in ministry.

In the beginning of October, we gathered together as a learning community to explore the artform of proclamation. 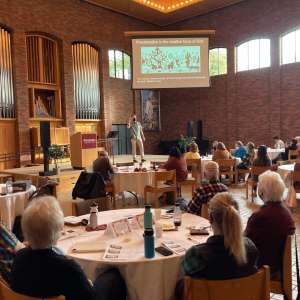 But what is proclamation and why does it matter?

There is a concept within the philosophy of language called performative utterances. This idea was developed by philosopher John L. Austin in the 1940’s and 1950’s . He was arguing against the notion that all words and statements are only descriptive or evaluative. He uncovered certain phrases and uses of words that are not intended to be descriptive at all, but are rather intended to be performative. A classic example he would use is the utterance, “’I name this ship the Queen Elizabeth’ – as uttered when smashing the bottle against the stem.” Other examples would include, “I now pronounce you equal partners in marriage”, or “I forgive you.” These words and phrases are not describing or evaluating anything, rather they are doing things.

This idea of performative utterances helps us understand what we mean when we talk about the word of God. God’s words are performative utterances. They do things. In the first chapter of Genesis, God is not describing or evaluating what the cosmos has or will look like. Instead, God is calling the cosmos into being. “Then God said, ‘Let there be light’; and there was light” (Genesis 1:3, NRSV). But the performative utterances of God do not only show up as spoken words throughout scripture. In the second creation narrative, God is not speaking a word – only acting. “In the day that the Lord God made the earth and the heavens, when no plant of the field was yet in the earth and no herb of the field had yet sprung up – for the Lord God had not caused it to rain upon the earth, and there was no one to till the ground; but a stream would rise from the earth, and water the whole face of the ground . . . A river flows out of Eden to water the garden . . .” (Genesis 2:4b-6, 10, NRSV). There are times in scripture where God’s creative force is shared with the world through performative utterances, and there are times in scripture where God’s creative force is water.

In the Gospel of John, these two ways of thinking about God’s creative force – water and word – become embodied in the person of Jesus. “In the beginning was the Word, and the Word was with God, and the Word was God. . . And the Word became flesh and lived among us . . .” (John 1:1, 14a, NRSV). “Jesus said to her, ‘Everyone who drinks of this water will be thirsty again, but those who drink of the water that I will give them will never be thirsty. The water that I will give will become in them a spring of water gushing up to eternal life” (John 4:13-14, NRSV). Jesus is now the embodied performative utterance of God and the embodied living water of God. And in John 14 Jesus promises that this living water of God – this fluid performative utterance – that gave life to the cosmos and is embodied in Jesus – is now also gushing forth within us. This spring of water now gushing within us is God’s creative spirit. “To each has been given a manifestation of the Spirit for the common good” (1 Corinthians 12:7, NRSV). God’s creative life force that called our cosmos into life, the same one embodied in Jesus, is now made manifest within each of us. For the common good.

We are very fond of how theologian Douglas John Hall describes good news that is for the common good. He says,

“The good news is good because it challenges and displaces bad news. The Gospel addresses us at the place where we are overwhelmed by an awareness (as the liberationist, Juan Luis Segundo, has put it) of what is wrong with the world and with ourselves in it. It is good news because it engages, takes on and does battle with the bad news, offering another alternative, another vision of what could be, another way into the future. And the bad news is always changing.” (From, “What is Theology?”)

Elsa Tamez speaks of jubilee as this good news for the common good. She says,

“When one speaks of the jubilee, it is essential to have before one the concrete situation that one is experiencing: debts, poverty, unemployment, violence, discrimination, exclusion, conflicts, sorrow, dehumanizing consumerism, the lethargy of the churches. For the jubilee is the good news that supposedly puts an end to that reality of suffering and dehumanization. . . If we speak of jubilee in a generic sense, the injustice is hidden, and the jubilee loses its power and ceases to be jubilee.” (From, “Dreaming from Exile: A Re-reading of Ezekiel 47:1-12”)

God’s performative utterances do things. They bring order out of chaos, life out of nothing. The good news of Jesus challenges and displaces bad news that is always changing. It puts an end to our “reality of suffering and dehumanization”, a reality that is unfortunately always changing.

Our work of proclamation therefore, is not the work of describing or evaluating. Proclamation is performative. It does things. It is the work of uttering the good news in word and/ or deed that displaces bad news, and ends suffering and dehumanization. Before we can even do this work of proclamation, we must do the long, slow, hard, relational work of encountering and accompanying our neighbors. Then we might begin to understand their bad news. Then we might begin to understand the concrete situation they experience – the ways in which they are suffering and dehumanized. Once we’ve done that slow work, then we might have an idea of what the good news might look or sound like. This good news is always Jesus. It is always the performative utterance of God. The word of God made flesh. But because it is performative and because it becomes incarnate, it will always show up in the news ways that bring about life. The manifestation of that spirit has been given to us. Let us become God’s performative utterance – God’s good news – for our neighbor, for the common good.