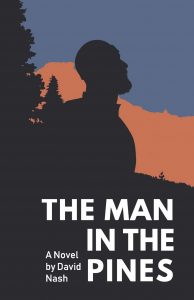 Per Minnesota tradition, David Nash ’06 first met the giant, talking Paul Bunyan in Brainerd, Minnesota when he was really young, and it left a lasting impression. So a few years ago when picking an American folklore to read to his son, it was obvious to David he should read the story of Paul Bunyan. Unfortunately, his son wasn’t that interested in tales of Paul and Babe the Blue Ox.

David has always enjoyed writing music, so he wrote a song about Paul to sing to his son, imagining if Paul was a real person. He wondered what if Paul’s story was a bit sadder, and perhaps we were taking advantage of his story and turning it into something else to get the happy folklore that it is now.After writing the song, David played it at an open mic and people really enjoyed it. Later, he heard an interview of a musician he listens to who mentioned they wrote a book based off a song.

“It occurred to me: why does my song have to be the end of the story?”

“It all came on suddenly, almost to the point that it felt kind of like a sickness. It was like I couldn’t get better until the story was all written down.”

By researching the history of logging in Minnesota and Wisconsin, as well as the great Hinckley fire, David aimed to write a historically accurate novel with American folklore, historical ecology, Native American spirituality, and love.

When a draft was complete, the next step was publication. David’s wife, alumna Sara (Holman) Nash ’06, suggested he reach out to Augsburg’s English Department. Sara is an English major graduate from Augsburg and connected David with Professor Emerita Kathryn Swanson.

“Kathy Swanson and the English Department helped me look for publishers and things to consider in terms of what makes the project marketable, and writing resources.”

Two publishers accepted David’s book: one was from Oregon and the other, Orange Hat Publishing, is located in Waukesha, Wisconsin.

“I went with the Waukesha publisher. Being more local, I felt a good connection with their owner, who went to the same high school as me.”

However, the current pandemic prevented the party from happening and canceled the book tour.

“With COVID, self-promotion is hard right now. As a musician, I thrive more off immediate interaction with people, in-person.”

David isn’t giving up, though. He still released the book in March and did an online reading with a few other authors. He also hosted an online concert with one other musician, during which David explained a few stories from book and played songs. When it’s safe to do so, he will tour with his book and accompanying songs, and have a proper launch party in La Crosse.

One surprising thing David learned about himself while writing The Man in the Pines is that he really likes writing.

“If someone would have told me I would enjoy writing a book, it would have been hard to comprehend. I like that you can start with an idea and you may not know your destination. I like writing myself out of problems. It can be frustrating, but also gratifying to discover the journey of your characters as you write.”

David had an early connection to Augsburg. His mom, Susan Nash, Ed.D., has been a nursing professor at Augsburg’s Rochester campus since 1998, and his older brother, Collin, played hockey at Augsburg. David was a biology major and also played hockey. He met his wife, Sara, their senior year in college, at a mutual friend’s birthday party.

Today, David is a Pediatric Ophthalmologist and Strabismologist at Gundersen Health System in La Crosse. He lives in Wisconsin with his wife and two children, where they spend most of their time outdoors, kayaking, jogging, fly and trout fishing, hiking, painting, and practicing photography.

“I have more interests and hobbies than I have time for!”