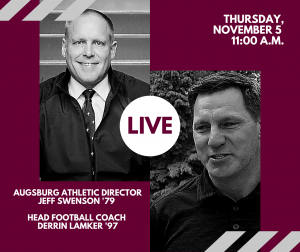 Imagine getting your dream job as head football coach at your alma mater just months before the start of a global pandemic. What are your new priorities? How do you serve your students and the University?

On Thursday, November 5 at 11:00 a.m. Central Standard Time all Augsburg alumni, faculty, staff, donors, friends, and students are invited to join a Facebook Live discussion with Athletic Director Jeff Swenson ’79 and Head Football Coach Derrin Lamker ’97 as they share updates on Augsburg athletics in 2020 and what they envision for the future. Click here to join the Auggie Connections Facebook Group where this discussion will be shared.

Jeff Swenson has been a member of the Augsburg community for more than 30 years — as a student, athlete, coach and administrator. A national champion wrestler at Augsburg in his senior year of 1979 with a career record of 102-17. Thanks to Swenson’s leadership, Augsburg produced 98 NWCA Scholar All-Americans, the most of any college in any division in the nation. Augsburg has had at least two Scholar All-Americans every year since 1993. Augsburg has also had eight ESPN The Magazine Academic All-Americans in wrestling, as awarded by the College Sports Information Directors of America (CoSIDA). Swenson, whose teams also won 20 Minnesota Intercollegiate Athletic Conference team titles, was named MIAC Coach of the Year 13 times and NWCA National Coach of the Year six times (1983, 1991, 1995, 1998, 2000, 2007). Swenson was inducted into the NCAA Division III Wrestling Coaches Hall of Fame in 2005, the Minnesota Wrestling Coaches Association/David Bartelma Wrestling Hall of Fame in 2004 and the Augsburg Athletic Hall of Fame in 1999. In 2000-01, Swenson was named Lutheran College National Coach of the Year (all sports) from Lutheran Brotherhood, and in 2002, he earned National College Coach of the Year honors (all divisions) from Wrestling USA Magazine.

Derrin Lamker, an Augsburg University Athletic Hall of Fame member who has become one of the top high school football coaches in Minnesota, is the 15th head coach in Augsburg football history. Lamker began his coaching career at his alma mater, where he spent four seasons (1999-2002) as an assistant coach, his final two seasons as offensive coordinator. He then moved to Robbinsdale Armstrong, his high school alma mater, where he was an assistant coach in football, boys’ basketball and baseball, and served as head coach for the girls’ basketball team in 2003-04.In 2005, Lamker was named head coach for the Osseo High School football team. In 11 seasons there, he led the Orioles to three conference championships, two section titles and the Minnesota Class 6A state title in 2015. He had a 74-39 record at Osseo, part of his 94-50 high school career coaching record. He earned Northwest Suburban Conference Coach of the Year honors three times, was named section coach of the year twice and was named Minnesota Class 6A State Coach of the Year in 2015. He also served on the coaching staff for the Minnesota High School All-Star Game twice, including as head coach in 2015. For the past three seasons, Lamker served as head coach at Edina High School, where he led the Hornets to the Minnesota Class 6A state tournament quarterfinals in 2017 — only the team’s third state tournament appearance in school history — and a 20-11 record. He served as offensive coordinator at Edina in the 2016 season before being named head coach in 2017. He earned section coach of the year honors in 2017.