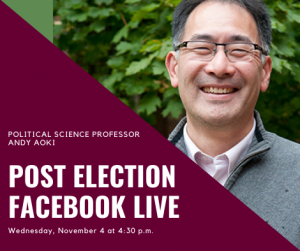 All members of the Augsburg community are invited to join a post-election Facebook Live discussion on Wednesday, November 4 at 4:30 p.m. Central Standard Time. Click here to join the Auggie Connections Facebook Group to hear Professor Aoki’s reflections on election 2020 and to participate by asking questions during the Q & A.

Professor Aoki joined the Augsburg faculty in 1988 where he now specializes in racial and ethnic politics and American political thought, and teaches courses in political theory and American politics. He started out in high school wanting to be a physicist, lawyer or musician, but his interest in public affairs led him to political science. He holds a B.A. University of Oregon, a M.A. University of Wisconsin-Madison, and a Ph.D. University of Wisconsin-Madison. His publications include Asian American Politics (Polity Press, with Okiyoshi Takeda) and Newcomers, Outsiders, and Insiders: Immigrants and American Racial Politics in the Early Twenty-First Century (University of Michigan Press, with Ronald Schmidt, Sr., Yvette Alex-Assensoh, and Rodney E. Hero), as well as a number of other works on the politics of race and ethnicity, Asian American politics, and the politics of immigration.