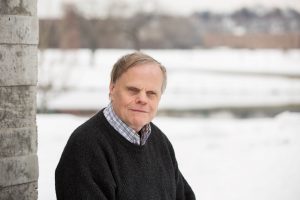 Kevin Fjelsted ’18, MBA ’20 is one of many Augsburg students who graduated during the pandemic. However, Kevin’s higher education story has a unique beginning. While most of Augsburg’s recent graduates started their higher education in the last four or five years, Kevin started in 1973.

Kevin graduated from high school in the 70’s and as he thought about college, he wasn’t particular about where he would go. He admits he wasn’t heavily involved in picking Augsburg.

“My grandparents wanted me to go to Augsburg. They told me to look at Augsburg and I said ‘fine,’” says Kevin.

He started at Augsburg in 1973 and took a few classes during the fall and January interim semesters. But Augsburg didn’t have what Kevin was looking for at the time, so he transferred to the University of Minnesota in 1974 where he also worked at the U of M’s Computer Center.

Shortly after, Kevin began working full-time as an operating systems programmer at Lawrence Berkeley National Labs. Over the next fifteen years, he worked for a few companies – including IDS Financial Services, McGraw-Hill, and American Express – before going out on his own as a systems consulting and programming service provider. He took computer science courses here and there, but never focused on a degree because he was working full time.

In 2010, Kevin decided to go back to school and finish his degree in computer science.

“My default was to go back to the U of M,” says Kevin. “But there were two problems. One, the lecture size. There were over 100 people in my computer science classes. And two, I needed accessibility. I needed books in braille and although the U of M has a large disability resource center employee count wise, they didn’t have the experience accommodating a blind person.”

Kevin knew Kathy McGillivray from the National Federation of the Blind, and knew she was the director in Augsburg’s CLASS Office.

“We talked about smaller classes that were actually taught by the professors, unlike the U of M having Teaching Assistants do a lot of the teaching. Kathy knew what I needed for accommodations as well. She was an ally in the whole process. We worked together through accessibility for both my computer science undergraduate degree and the MBA program. Once we got that solved, it was great!”

Kevin completed his undergraduate computer science degree in 2018 and immediately started in Augsburg’s Master of Business Administration program, graduating in the winter of 2020.

Now he is working with a business colleague on building a couple company’s telecommunications space and Voice over Internet Protocol and Omnichannel call center solutions. Kevin is also excited about starting an A.I. venture in the near future.

Despite the process taking almost 50 years from start to graduation, Kevin is thankful for his time at Augsburg. He’s particularly thankful for the professors he studied with.

“I didn’t have a single negative experience with a professor at Augsburg, even going back to the 70’s. I had a great calculus professor and psychology professors. George Dierberger, the MBA director, has pulled in great adjunct professors who are the best in the industry. You can respect and trust the information from the professor because they have the knowledge and industry experience.”

“They use the same textbooks, the same curriculum. At the U of M, you have 100 plus people in a class, but shrink that down to 25 people at the high end at Augsburg, and that is a significant difference. Yes, Augsburg has teaching assistants and tutors like the U of M, but they don’t have the same concept where the professor pushes all the work onto the teaching assistant. At Augsburg you have direct interface and direct communication with the professors.”