Jesus can regularly be heard saying “the kin-dom of heaven is like…” and then offering an image, a story, a metaphor to root this vision to a place or experience. It is like a mustard seed, a lost coin, wheat among the weeds, a treasure in clay jars, the leaven that makes bread rise. Kin-dom or reign of God are of course, in themselves a kind of metaphor that reflect the ancient context of their teacher.  These metaphors speak to the audience – an agricultural community of peoples around the turn of the century – as Jesus seeks to stir the people’s imagination for the kind of world God desires them to experience and participate in. 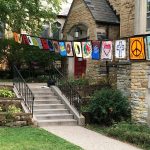 The Riverside Innovation Hub and the congregational partners we’ve been blessed to learn alongside these past several years, have been about this kin-dom of God work too. I cannot remember ever using this language explicitly with our congregational learning communities. But what we have been talking about and working towards is cultivating more places and relationships that reflect the ways God intends for us to be and be together. We’ve been chasing after that call, one relationship at a time, one walk through our neighborhoods at a time, one story or surprise at a time.

Kin-dom metaphors may not quite fit our current context, but the idea of a front porch has caught our imagination as a helpful metaphor to encourage the relationship building work we are trying to be about. Relationships that shape stories that shape neighborhoods that look and feel a little bit more like God’s good intentions for a whole, flourishing and connected creation – one neighborhood block at a time.

On one of these neighborhood blocks – at the corner of Colfax and W 46th St. in south Minneapolis – sits Sts Luke & James Episcopal Church. Also on this corner block exists a front porch of sorts. It wasn’t always there, but a few years ago the folks from this congregation began seeking out places to listen to their neighbors and some hints of an invitation began to stir among them.

The congregation members were visiting with local business owners and discovered that a mainstay coffee shop in the neighborhood was going to be closing. They were learning from their neighbors that this place was one of the few public gathering spaces. A common ground for those living in the area, those who biked through, and others who worked, worshiped or played in their neighborhood. In collaboration with the owner of the soon to be closing coffee shop, some members from the congregation hosted a listening post there. They invited people to gather and share about what they loved and longed for in this neighborhood.  Among the things they heard was the realization that with the closing of this coffee shop, the neighborhood would soon have fewer places where neighbors could meet neighbors, rub shoulders, and connect outside of their homes. 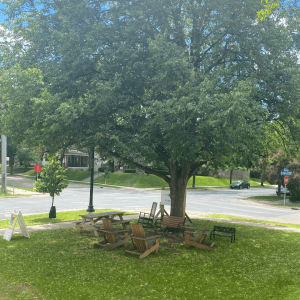 The folks at Sts Luke and James began to wonder about their front yard on the corner of Colfax and W 46th St. They began to imagine how they might nurture that space more intentionally so that it would be more accessible to their neighbors. Over time, a front porch of sorts emerged. It began with placing adirondack chairs under the shade of a beautiful oak tree on the corner of the lot. They noticed people began sitting in the chairs! So they added a picnic table and people from nearby restaurants would bring their take out and sit and eat. Young adults would meet and gather in the hospitality of the space. Then the folks from Sts Luke & James began to wonder – what if this is a “welcome to the neighborhood” space? And so they started offering free ice cream to passersby on Sundays after worship. They met neighbors, shared ice cream, laughs, small stories, pet lots of dogs and sometimes people would ask for prayer. A free little pantry was added, a prayer wreath that people could interact with, and offerings of ice creams turning into hot cocoa in the winter. The people of Sts Luke and James began to see themselves as a “welcome to the neighborhood” team and they’ve been following the thread of that call ever since.

Building this front porch was not a straightforward and easy road. In the beginning, there were people from the church who were skeptical. Their nearly 100 year old brick building has a lovely red door that leads into their sanctuary and many only had interest in talking to people in the neighborhood for the purposes of getting new folks through those red doors and into the church. But as they moved further into the neighborhood with a sense of curiosity, the conversations and relationships they began to cultivate triggered a significant shift. Something began to change as they moved into their front yard on Sunday mornings with free ice cream for neighbors passing by. Their encounters with neighbors reorientated their questions from wondering how to get people through the red doors and into their church building to imagining how they might get their church community OUT of the red doors and into the neighborhood. Particularly onto the “front porch” they had begun to create on the corner.

Their front porch has made room for interaction, curiosity, neighborliness, conversation, rest, companionship and of course, ice cream. It has become a place where boundaries become more porous and God’s kin-dom perhaps has a little more freedom to stir in the hearts and minds of those who dwell there. As one of their members, Sheila Foster, said, “This work is a slow process that happens through one-by-one moments.” The front porch story of Sts Luke and James may not make for a flashy news headline, but I think their story points to something more lovely and durable. The folks at Sts Luke and James, along with their neighbors, are faithfully stitching together the fabric of their neighborhood one ice cream, conversation and moment at a time.

As we continue to partner together with congregations discerning God’s call for them into deeper relationship with their place and their neighbors, we are on the lookout for these front porch places. These front porch stories help us to remember the connection God has gifted to each of us with one another. They remind us of the call to nurture and steward the kinds of relationships that bring us a little closer to God’s hopes and dreams for us and our neighbors.