Each year for the Augsburg Youth Theology Institute, daily themes are chosen that are grounded in a biblical text. During the months of training and preparation for the Institute, the college mentors engage in theological reflection as a team and dig deeper into the biblical texts together. Through their leadership development with staff and the Institute chaplain, they read, plan, write, and eventually lead daily devotions for participants using these verses. The following themes and verses are now this year’s devotions. 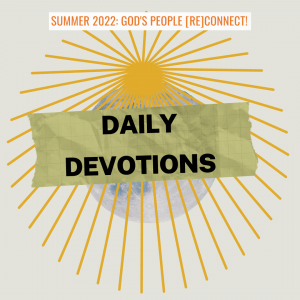 prepared to write these devotions. The hours of conversation, prayer, theological reflection, and support that were given throughout the process is gratefully appreciated. We are proud of our college mentors and their work this spring.

AYTI offers these themes and devotions for use by our partners. All credit should be given to the Augsburg Youth Theology Institute when using this material. Thank you.

The Augsburg Youth Theology Institute (AYTI) inspires emerging high school theologians to observe, interpret, and engage their world through Christ for the sake of their neighbor. Our participants learn how to reflect theologically on culture and find meaningful ways to respond to the call from God that happens in this process of reflection.

To achieve this, we provide an intense, one-week residential experience with a new theme every year. Students read theological texts and experience a college classroom, participate in worship, explore diverse community-based learning, and have intentional small group conversations led by college mentors. Following their week on campus, students write a theological paper on the theme and their paper is published in a journal to be shared with congregations and the wider community.  www.augsburg.edu/ayti

Now the serpent was more crafty than any of the wild animals the Lord God had made. He said to the woman, “Did God really say, ‘You must not eat from any tree in the garden’?”

“You will not certainly die,” the serpent said to the woman. “For God knows that when you eat from it your eyes will be opened, and you will be like God, knowing good and evil.”

When the woman saw that the fruit of the tree was good for food and pleasing to the eye, and also desirable for gaining wisdom, she took some and ate it. She also gave some to her husband, who was with her, and he ate it. Then the eyes of both of them were opened, and they realized they were naked; so they sewed fig leaves together and made coverings for themselves.

Then the man and his wife heard the sound of the Lord God as he was walking in the garden in the cool of the day, and they hid from the Lord God among the trees of the garden. But the Lord God called to the man, “Where are you?”

He answered, “I heard you in the garden, and I was afraid because I was naked; so I hid.”

And he said, “Who told you that you were naked? Have you eaten from the tree that I commanded you not to eat from?”

The man said, “The woman you put here with me—she gave me some fruit from the tree, and I ate it.”

Then the Lord God said to the woman, “What is this you have done?”

The woman said, “The serpent deceived me, and I ate.”

The Parable of the Lost Sheep – Now the tax collectors and sinners were all gathering around to hear Jesus. But the Pharisees and the teachers of the law muttered, “This man welcomes sinners and eats with them.” Then Jesus told them this parable: “Suppose one of you has a hundred sheep and loses one of them. Doesn’t he leave the ninety-nine in the open country and go after the lost sheep until he finds it? And when he finds it, he joyfully puts it on his shoulders and goes home. Then he calls his friends and neighbors together and says, ‘Rejoice with me; I have found my lost sheep.’ I tell you that in the same way there will be more rejoicing in heaven over one sinner who repents than over ninety-nine righteous persons who do not need to repent.

The Parable of the Lost Coin – “Or suppose a woman has ten silver coins and loses one. Doesn’t she light a lamp, sweep the house and search carefully until she finds it? And when she finds it, she calls her friends and neighbors together and says, ‘Rejoice with me; I have found my lost coin.’ In the same way, I tell you, there is rejoicing in the presence of the angels of God over one sinner who repents.”

After this Jesus went to the other side of the Sea of Galilee, also called the Sea of Tiberias. A large crowd kept following him, because they saw the signs that he was doing for the sick. Jesus went up the mountain and sat down there with his disciples. Now the Passover, the festival of the Jews, was near. When he looked up and saw a large crowd coming towards him, Jesus said to Philip, ‘Where are we to buy bread for these people to eat?’ He said this to test him, for he himself knew what he was going to do. Philip answered him, ‘Six months’ wages would not buy enough bread for each of them to get a little.’ One of his disciples, Andrew, Simon Peter’s brother, said to him, ‘There is a boy here who has five barley loaves and two fish. But what are they among so many people?’ Jesus said, ‘Make the people sit down.’ Now there was a great deal of grass in the place; so they sat down, about five thousand in all. Then Jesus took the loaves, and when he had given thanks, he distributed them to those who were seated; so also the fish, as much as they wanted. When they were satisfied, he told his disciples, ‘Gather up the fragments left over, so that nothing may be lost.’ So they gathered them up, and from the fragments of the five barley loaves, left by those who had eaten, they filled twelve baskets. When the people saw the sign that he had done, they began to say, ‘This is indeed the prophet who is to come into the world.’

Invitation: At the next two meals, pick a favorite Bible verse or poem or other written work.  Read it before your next meal and then eat, then contemplate it. Then, at your next meal, eat and then read the same work. Contemplate. When did it speak to you the most?

“That same day, two of the disciples were making their way to a village called Emmaus -which was several miles from Jerusalem- discussing all that had happened as they went. While they were discussing these things, Jesus approached and began to walk with them, though they were kept from recognizing Jesus, who asked them, “What are you two discussing as you go your way?” They stopped and looked sad. One of them, Cleopas by name, asked him, “Are you the only one visiting Jerusalem who doesn’t know the things that have happened these past few days?”

Jesus said to them, “What things?” They said, “About Jesus of Nazareth, a prophet powerful in word and deed in the eyes of God and all the people– who our chief priests and leaders delivered him up to be condemned to death and crucified him. We were hoping that he was the One who would set Israel free. Besides all this, today– the third day since these things happened– some women of our group have just brought us some astonishing news. They were at the tomb before dawn and didn’t find the body; they returned and informed us that they had seen a vision of angels, who declared that Jesus was alive. Some of our number went to the tomb and found it to be just as the women said, but they didn’t find Jesus.”

Then Jesus said to them, “What little sense you have! How slow are you to believe all that the prophets have answered! Didn’t the Messiah have to undergo all this to enter into glory?” Then beginning with Moses and all the prophets, Jesus interpreted for them every passage of scripture which referred to the Messiah. By now they were near the village they were going to, and Jesus appeared to be going further. But they said eagerly, “Stay with us. It’s nearly evening– the day is practically over.” So the savior went in and stayed with them.

After sitting down with them to eat, Jesus took bread, said the blessing, then broke the bread and began to distribute it to them. With that their eyes were opened and they recognized Jesus, who immediately vanished from their sight. They said to one another, “Weren’t our hearts burning inside us as this one talked to us on the road and explained the scriptures to us?” They got up immediately and returned to Jerusalem, where they found the Eleven and the rest of the company assembled. They were greeted with “Christ has risen! It is true! Jesus has appeared to Simon!” Then the travelers recounted what had happened on the road, and how they had come to know Jesus in the breaking of the bread.”