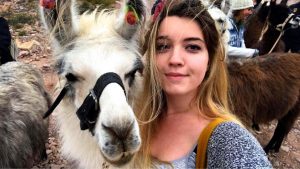 Asturias lies in the northern portion of the country; it is a coastal province on the Bay of Biscay, facing France. According to Oswood, the Fulbright program in the area is relatively small, and still very new. “I’m one of 14 Fulbright Scholars going to Asturias this year, and I’ll be part of the second cohort ever,” she said. “It feels like I’m helping forge a bond between Asturias and Fulbright.”

“While in Spain, I hope to travel a lot and improve my Spanish,” said Oswood, who has had an interest in travel since she was very young. She told us about how she used to watch travel shows and Discovery Channel documentaries on faraway places and owned a collection of travel encyclopedias which she perused as a child. 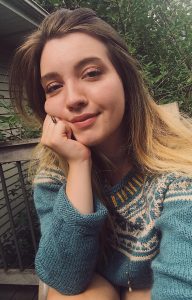 Oswood has extensively practiced her everyday Spanish skills. “My mom speaks Spanish, and the town I grew up in has a high Spanish-speaking population.  I started learning in high school, but I only did it because I wanted to go on the class trip to Spain,” she said. “In Spain, though, I fell in love with the language.” “I’m looking forward to experiencing the country without a tour group.”

While attending Augsburg, Oswood spent a semester in Argentina, living in Buenos Aires with a host mom who didn’t speak English. “The experience made me get over the embarrassment of asking people to repeat themselves, and I got really good at using the polite form of ‘what?’”

“When I was hiking in Patagonia, I actually stopped taking pictures. Instead, I said to myself, ‘I’m going to remember this moment,’ and took a mental snapshot. I plan to do the same in Spain: just enjoy moments as they happen.”

On the whole experience of being named a Fulbright Scholar, Oswood said, “It feels like a dream.”  “I didn’t think it was a possibility and I didn’t want to bank on it. I keep thinking about how if I told myself in my freshman year of high school that I’d be moving to Spain in the future, I wouldn’t have believed it. But I’m excited. I love kids, volunteering, and I’m hoping to form relationships with students and show them what the U.S. is, explain its politics, and show a different face of the U.S. than what most people know.”

To others thinking about starting the application, Oswood encourages putting in the time, “I actually enjoyed writing the statements, even though I rewrote many drafts with the help of the URGO office. With Fulbright and summa, both felt like a nice bookmark where I got to look at all of the experiences Augsburg has given me. I thought about how my life looked thus far and helped me organize trajectories for the future.”

Be sure to keep up with the blog to hear about Madeleine and the other Fulbrighters!