Dr. Ruth Johnson ’74, and Philip A. Quanbeck II, religion professor emeritus, will lead a pilgrimage tour to I 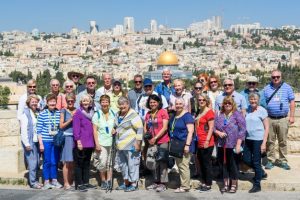 Dr. Ruth and Dr. Phil led four tours to Greece and Turkey with Augsburg University students in 2003, 2005, and 2007, and with adults in 2008. They also led an Augsburg alumni tour to Israel in 2012, and most recently, in 2017, they led their own tour to Israel, Palestine, and Jordan, which included a number of Auggies.

“We had a good group ready to go in May 2020 but COVID hit and we had to cancel,” they said. Adding, that conditions are now very favorable again for travel to the Holy Land.

Currently, they are working with a travel agency in Bethlehem called Shepherds Tours, which is closely associated with Dar Al-Kalima University and the Rev. Dr. Mitri Raheb. Mitri Raheb and Dar Al Kalima have ties to Augsburg. Several Augsburg faculty including Jacqui DeVries have been to Dar Al Kalima in recent years, and Mitri Raheb has visited Augsburg on several occasions. 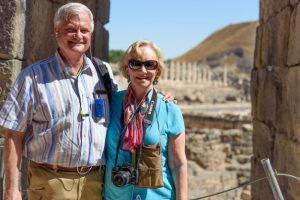 Johnson and Quanbeck’s tours visit well-known biblical sites associated with both Old Testament and New Testament stories and figures. They will visit the Galilee region and Jerusalem, the Dead Sea, Masada, and Jerusalem. And Bethlehem on the West Bank. They also engage current realities in Israel and the West Bank (Palestine). The extension to Jordan will include Petra, the area of building carved in red rock.

“We also meet with the Parents’ Circle Family Forum which is an Israeli and Palestinian group of parents who share their losses of children in the struggle,” they said. “We visit an Israeli settlement on the West Bank and a refugee camp operated by the United Nations High Commission on Refugees, camps which are a remnant of the 1948 war.”

Johnson and Quanbeck encourage Augsburg alumni and friends to join them on the next pilgrimage and experience the tour firsthand. 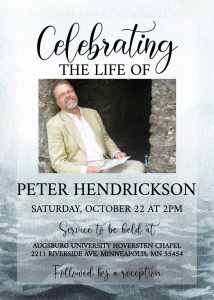 Longtime Director of Choral Activities and Professor Emeritus, Dr. Peter Hendrickson, died this past June at the age of 67. A celebration of his life will be held at Hoversten Chapel on the campus of Augsburg on Saturday, Oct. 22, at 2:00. All are welcome to attend!

An important part of the memorial service will be a special choir made up of Augsburg alumni and former Masterworks Chorale singers who had the privilege of singing under Dr. Hendrickson. A short rehearsal, led by Mark Sedio and Nancy Grundahl, will take place at 12:30, just prior to the memorial service in Hoversten Chapel.

Tina Brauer in the Augsburg Music Department can be contacted with questions as needed (brauer@augsburg.edu). Music to be sung will be emailed to you in advance.

Register to sing in the alumni choir- https://forms.gle/tDJemuQDwviJueDG6

If you would like to be part of the memorial service choir, please RSVP- https://forms.gle/RPTZMD9JDzKEBBYs5

John R. Holum, Ph.D., is a beloved Augsburg University retired professor whose legacy spans over 30 years as faculty. He is a prolific writer who has published dozens of books and peer-reviewed papers, which have inspired not only generations of students who read his chemistry textbooks, but also thousands of researchers and teachers around the world.

One nominator says this of Holum in a letter of support: “In his life and work he embodies the very ethos of Augsburg’s commitment to the education of the whole person…Dr. Holum’s approach to pedagogy was both engaging and inspiring…he made the material accessible to all and exciting to learn. He was articulate and patient.”

After serving in the Army, where he enjoyed a community of fellow scientists, Holum briefly taught chemistry at Pacific Lutheran University on the West Coast. Drawn to Augsburg in 1957 because it was at the center of population density for Lutheran students in the United States, Holum had a vision to empower the next generation of science and medicine students to be faithful Christian witnesses in a variety of industries and locations.

The more students he got to know—including one exemplary Augsburg student, Peter Agre ‘70, who later won a Nobel Prize for chemistry—the more he realized the caliber of their character, intelligence, and diligence. This deepened sense of appreciation for his students transformed into a drive to write textbooks that better suited the needs of students learning in his classrooms and others studying the alluring complexities of chemistry. Through discussions with traveling textbook salespeople and a summer of long days researching with a grant from the National Science Foundation, his creation of a single textbook developed into a successful writing and publishing career that complemented his teaching in the classroom.

Holum’s lifelong passion for academic excellence and support of students on their educational journey reflects Augsburg’s anchoring principles of robust liberal arts and professional studies, guided by the faith and values of the Lutheran church. Generations of students can attest to the transformational power of learning embedded within Holum’s life and career. He was kind and generous as a professor, and is a man who lives a life of faith and service beyond the classroom.

If Jane Austen were magically to come back to life and appear in Devoney Looser’s ’89 English classroom at Arizona State University, she would undoubtedly be charmed by the lively discussion of her writings from two centuries ago, pleased that they had survived and continue to be relevant among college students. If she decided to hang out after class, however, she would be in for quite a surprise, learning about Looser’s athletic alter ego. For the past five years, Looser has played roller derby as Stone Cold Jane Austen.

A Twin Cities native, Looser first encountered Austen’s novels as a teenager (thanks to her mother, who had not read the novels herself but sensed their importance). Looser loved the opportunity to read them then—and loves to teach them now—along with other favorites from that era, like Frances Burney, Mary Hays, and Maria Edgeworth. She also is intrigued by other truly unusual women from that period who led fascinating lives: Harriette Wilson, Lady Hester Stanhope, and Anne Lister.

Now, Looser is following their example. She is editor of a recently released volume, The Cambridge Companion to Women’s Writing in the Romantic Period (Cambridge University Press). As much as she enjoys spending time around people who’ve written fascinating books (one of the “great gifts” of her professional life), she is likely surrounded by many who feel the same about her. Find more information on her numerous publications and background at devoneylooser.com. END_OF_DOCUMENT_TOKEN_TO_BE_REPLACED