Early in Jeffrey Eugenides’ novel The Marriage Plot, protagonist Madeleine Hanna worries that most English majors become English majors simply by default. “Because they weren’t left-brained enough for science, because history was too dry, philosophy too difficult, geology too petroleum-oriented, and math too mathematical… these people were pursuing university degrees doing something no different from what they’d done in first grade: reading stories. English was what people who didn’t know what to major in majored in.”

However, this passage appears on page 21. English majors worth their salt know that a protagonist will eventually be enlightened. By the end of the novel, Maddie will see– as we see, here in the English department– the value of her major.

Yes, an English major reads stories. But these stories are not the same as those we read in first grade. The best stories are those that challenge us, shock us, confuse us, unsettle us, change us, and demand that we respond. Literature is not easy. Its purpose is to make a familiar world feel strange and new again; to expand our sense of empathy; to “arrest our attention,” according to Saul Bellow, “in the midst of distraction.”

Although English literature is steeped in histories of oppression, colonization, sexism, racism, and other forms of violence, it has also been a vehicle for the subversion of dominant ideologies and histories. How does one design an “English” major when the English language has been both a colonizing force and a power that enables writers like black lesbian poet Audre Lorde to transform “silence into language and action”? What does it take to responsibly teach texts that are both problematic and poetic, unsettling and beautiful, worldly and transcendent?

We recognize that English majors can be many different things: poets, book lovers, activists. They might become grantwriters or teachers or editors, yes, but they might also become lawyers, web designers, engineers, physical therapists, social workers, or business moguls.

Whatever path they choose, they know that the English major has provided them with essential skills to guide their way: creative and critical thinking and writing, research methods, argumentation, collaborative problem-solving, close reading, project management, and leadership. Most importantly, the major will have empowered them to strengthen and hone their own interpretations, opinions, and voices. “Powerlessness and silence,” as Margaret Atwood writes, “go together.” James Baldwin puts the same idea differently: “You write in order to change the world.”

Audre Lorde once claimed that “poetry is not a luxury. It is a vital necessity of our existence.” We agree, and add: the same is therefore true of an English major. 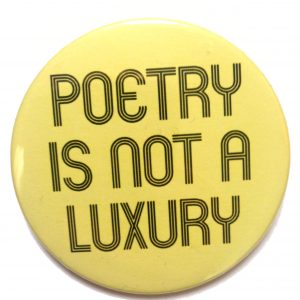