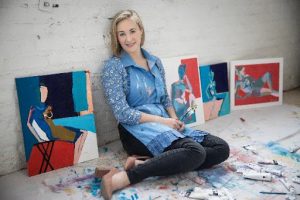 Colleen (Carstensen) Peterson aka “CeCe” graduated from Augsburg University in 2004 with a double major in Psychology and Religion and a triple minor. She has made it her life mission to help others see their strength through their trials and tribulations, something that she is infinitely familiar with. From being diagnosed with dyslexia at eight, being an Olympic-trained figure skater and enduring the abuse of her coaches, losing her brother at 25, to having a severely disabled son, CeCe has founded a non-profit and used art to find strength in challenging times.

The birth of CeCe’s son and her frustration with not getting the right adaptive equipment to learn, play, and grow inspired the creation of her non-profit, Children’s Organization of Lending Equipment (The COLE Foundation). This mission of COLE is “connect costly adaptive equipment from children with disabilities who outgrow the equipment to other children who need it, at no cost. COLE provides a resource for families to browse and then Lend from our library of equipment.” 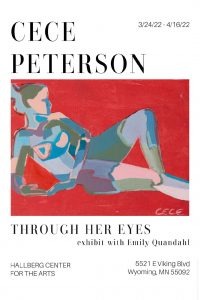 Another outlet for CeCe has been her artwork. Her most recent work will be exhibited at Hallberg Center for the Arts (Wyoming, MN) from March 24 – April 16, 2022. Her intentions for her series, Little Girls in Pretty Boxes, are to reveal the struggle and loneliness but also the strength of womanhood. CeCe’s bold color palette creates the female form representing light, shadow, and space. Taking a closer look at each shape and stroke, the big and small events in life become a harmonious dance on canvas. 50% of the profits from each purchased painting will go to the COLE Foundation. Check out CeCe’s website: Www.CeCegallery.com.

Originally from Tegucigalpa, Honduras, Killa Marti, Esq. ‘08 arrived in the United States in 2004 as a student. She obtained a bachelor’s degree in International Relations and Economics from Augsburg University in 2008. Shortly after, she left to fulfill an employment obligation in China. After concluding her employment contract with the Hua Qiao Language Institute in Chang Chun, China, Killa returned to the United States to obtain a Juris Doctor from Hamline University School of Law (now Mitchell Hamline School of Law).

One of her nominators, Zaira Solano, says this about Killa in her nomination letter, “Killa is a relentless advocate, woman of integrity, and leader in everything that she does.”

With the clear objective of working in the field of immigration, Killa took every opportunity to serve the immigrant population in the United States. She served in an internship at the Immigrant Law Center of Minnesota and was a volunteer for Civil Society, a nonprofit that works to help victims of human trafficking. She also completed a practicum at the law firm of Contreras Edin & Associates. Killa represented Hamline in the Inter American Human Rights Competition in Washington, D.C., and worked for the state legislature in Minnesota through its Minnesota Council on Latino Affairs. During this time, Killa also worked in the legal publishing division of Thomson Reuters, a global news agency and publisher. Upon graduation, Killa worked for the firm of Cole & Vondra, PLLC in Iowa City, Iowa, where she had the opportunity to litigate in the immigration courts of Omaha and Chicago. She also defended immigrant clients in the state courts of Iowa.

For the last three years, Killa has worked in Georgia, assisting the launch of the Immigration Services program at the nonprofit Lutheran Services of Georgia. During her time there, she worked closely with refugees and sponsors of unaccompanied minor immigrant children. Killa accepted a position at Solano Law Firm, litigating cases before the Atlanta Immigration Court and the Board of Immigration Appeals. She also serves as the leader of a low-income, volunteer-run legal clinic called Gospel Justice Initiative in the city of Clarkston, Georgia. Killa is licensed to practice law in Iowa, Georgia, and immigration law all over the nation, and is now owner and managing attorney of her own firm, Marti Law Firm, LLC.

Killa is known as a fiercely motivated attorney who works tirelessly for her clients in districts and cases where the decks are stacked against them. In signature Auggie fashion, her career has developed as one which recognizes the needs in our diverse world and takes meaningful action to meet those needs. She served as chair of the Pro Bono Committee of the American Immigration Lawyers Association chapter in Georgia and Alabama from 2016 to 2018, and she continues to pair clients in need of Pro Bono services with local attorneys and mentor lawyers early in their careers.

Killa has been called a person of faith, integrity, intelligence, commitment, and compassion. She embodies the values of Augsburg through thoughtful stewardship, critical thinking, and rigorous pursuit of justice and equity. She is dedicated to ensuring education and financial support are available to girls, and she is working to grow her acts of kindness into a nonprofit where she can empower more students so they can live to their fullest potential.