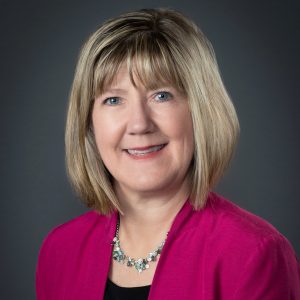 Brynn Watson ’89 is Lockheed Martin’s Vice President in the Digital Transformation Program. As COVID-19 moved most of Lockheed Martin’s work online, Brynn’s work became more important than ever, helping her teams pivot to a digital platform. She has been pleasantly surprised that productivity and efficiency have continued and says her teams have adapted positively to online programs to stay connected. While this has been a big change for most of the company, it’s a change Brynn embraces, especially in her leadership role.

“We’re more empathetic about work-life balance. Parents are teaching their kids. We’ve become more accepting about dogs barking in the background of a phone call. I like that change. It’s a good thing.”

In 2018, Brynn was recognized with Augsburg’s Distinguished Alumni Award for her commitment to helping young women in STEM.

Brynn’s dedication to helping others through community building started long before her work at Lockheed Martin. It started in middle school with the influence of another Auggie: Ertwin “Ert” Jones-Hermerding.

Ert graduated from Augsburg in 1969 with a degree in Speech, then moved to Robbinsdale to teach speech and theater at the middle school. This is where Brynn first met Ert and first learned about Augsburg.

“What he had our theater groups focus on was not only our craft, but our community. I got into the focus on service really young.”

Brynn thought Augsburg sounded like the best college from Ert’s depiction. In fact, when applying for college, she only applied to Augsburg.

“I followed in the footsteps of my favorite teacher,” says Brynn. “I was really motivated to go to a place where I could learn and also make an impact on my community.”

At Augsburg, Brynn was involved in campus life as a resident advisor, a cheerleader, and as part of ODK, a national organization that recognized students with responsible leadership and service in campus life skills. And it was in her math class that she developed a love for problem solving. Dr. Lawrence Copes, Chair of Math Computer Science, challenged Brynn and her classmates to think differently about math.

“He opened our minds to what math is, he called it a beautiful language and problem solving language.”

Brynn graduated from Augsburg, then went on to earn her master’s degree in applied mathematics from the University of California at Riverside. After a few years at Aerojet Electronic Systems, she attended a job fair where she met a female executive, Amy Flanagan, who was focused on recruiting women to Lockheed Martin. Brynn was so impressed with Amy that she decided she wanted to work for her.

“I honed my focus on service at Augsburg, but when I met Amy, I was introduced to her passion and I wanted to work for her and work for the place she was committed to.”

At Lockheed Martin, Brynn has held a variety of positions, including vice president of Navigation Systems Operations and deputy for the Global Positioning System (GPS) III program for Lockheed Martin Space.

“I have a lot of great memories and experiences of

developing products, launching satellites, those are awesome and amazing things that are doing wonderful things for our country and our world.”

When asked what she is most proud of in the time since graduating from Augsburg, Brynn says raising her daughter to be an amazing young woman. Brynn is also proud of her work mentoring others, especially women.

Augsburg prepared her to go out into the world and make an impact, and Brynn sees this impact in her daughter, in her daughter’s friends, and in others she’s mentored over the years.

“It’s visiting classrooms, it’s one kid that got a spark from that visit. That’s amazing to be able to create those sparks that can solve the next big challenge for the world.”

Brynn has mentored several women in her career, including college students who now work at Lockheed Martin. She is also on the Executive Steering Council for Lockheed Martin’s Women’s Impact Network, and is co-chairing this year’s virtual women’s leadership forum.

“As much as I believe we are making a lot of progress in our quest to improve the diversity metrics—particularly the female to male ratios—there’s a lot of work to do. I always make sure that people surround themselves with mentors and sponsors and champions. You are creating a network of support so as you need to make difficult decisions—whether it’s technical decisions within your day job or it is advice on how to find that next opportunity—you’ve got that support network.”

Brynn’s daily work doesn’t include typing code or doing math problems on the white board like she used to, but she believes her work is still about solving problems and making sure the barriers her teams might be facing are addressed.

“Sometimes you think you have to do it all on your own and that’s never the case. I got to where I am because of mentors and teachers and my parents, all those people are the shoulders that I stood on to get to where I’m at.”