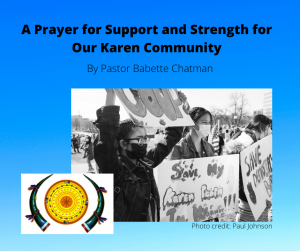 Two months ago, the Myanmar military staged a coup and overthrew the civilian government and has since met resulting protests with violence. The conflict is now entering a new stage as militias associated with the country’s ethnic minorities join the protests, with Karen refugees facing new air attacks by the military. Thousands have already fled into neighboring Thailand.

The Karen Organization of Minnesota is deeply concerned about the violent actions of the military in Burma that undermines efforts towards a democracy and continues to violate human rights.  For the Karen people, this coup has ushered in chaos, violence, and forced relocation.  In the month preceding the coup, attacks on Karen villages by the Burmese military increased significantly. In some areas of Karen State within Burma, such as in Brigades 1, 3 and 5, there has been ongoing fighting since then. As a result, thousands have had to flee and hide in the jungle.  So far, over 5,000 people have been displaced by these violent attacks.

In the spirit of unity, justice and change, we offer a prayer for the community supporting the Karen people in Myanmar and all people who suffer in chaos, violence and forced relocation as result of the Myanmar Civil War and advocacy for Human Rights.

May the souls of all beings move from suffering to liberation, from hate to love, injury of violence to pardon, from despair to hope.

In this time of great darkness, may the strength and support of this Augsburg community shine light and bring joy to your sadness.

And as people of faith grant that we seek to become informed and enlightened so that we are sensitive to the pains of our neighbors and respond with care; offering comfort, consoling and advocating for liberation and justice for the people of Myanmar.

GET INVOLVED IN CAMPUS MINISTRY