Today is Caucus Day across Minnesota! Tonight at 7pm, neighbors will gather to shape party priorities for the Republican Party, Democratic-Farmer-Labor-Party, and the Green Party. Even if you’ve never caucused before and have no idea what to expect, attending a precinct caucus gives you insights into how political party decisions get made and how we can help shape those decisions.

Anna Cox (‘22) describes training and strategies for caucusing below:

This will be my first time caucusing, and at first the process and information was overwhelming and confusing. I feel this is the best way I can add my voice and advocate for issues I am passionate about. I will be joining others tonight at 7:00 at the University of Minnesota to caucus for climate change and for PlannedParenthood. If you would like to join meet in the Christensen lobby at 6:15 pm. If you are interested in caucusing for the Republican Party it will be held in Humphrey School of Public Affairs room 50B and for Democratic-Farmer-Labor will be held in Fraser Hall #101.

Caucus For An Issue:

Across the state, the 100% Campaign, a statewide coalition that includes MN350 who trained us on this process, is encouraging people to Caucus for the Climate – to attend precinct caucuses and volunteer to be a Climate Delegate who will bring climate on to the next level of decision-making within each party. On January 23rd the Environmental Stewardship Committee held a Caucus for the Climate House Party, led by Andrew Marks, Blongsha Hang, and Allyson Green, and there were about twenty-five student attendees. During the caucus house party there was a focus on the climate crisis, who is responsible for the crisis, and what action can be taken to address and resolve the climate crisis. Even within our own state, Minnesota winters are warming ten times faster than our summers, and the ripple effects of climate change will be experienced by everyone. Just a three to four degree increase would cause inevitable and reversible damage, and our failure to act will be felt by current and future generations. This is why caucusing is so important and needed. Climate action bills are stuck in state senate and caucusing is a way to bring up the issues and resolutions the everyday citizen is passionate about. 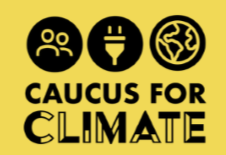 Six of the Augsburg student attendees committed to being a Climate Delegate. This sounds scary but literally means sitting through lots of other decisions at the caucus meeting (and either participating or doing your homework) until it’s time to elect delegates to the next round of party gatherings in March/April. Then, you just raise your hand and volunteer to be a delegate who will ask potential candidates how they will lead on climate action. So, in order for those candidates to get your vote, they need to demonstrate how they will take action, and then you will be able to hold them accountable for that action if they get elected. Caucusing is the purest form of democracy that we currently have in today’s governmental system, and this is a way beyond voting where you can share your own voice.

**Want to Caucus for the Climate? Sign up here and and stop by the ShareShop to grab a button to show your support!**

Caucus For A Candidate:

Another strategy for participating in the caucuses is to become a delegate for a specific candidate, to help them gain the support of the party. People caucus for specific candidates on the local, state, and national level. On Thursday February 6th, Planned Parenthood and Minnesota360 held a caucus training and informational session at the University of Minnesota during which we discussed what caucusing is and why it’s important. The session focused on how to become a delegate for a specific presidential candidate, something especially relevant for the 2020 elections.