On Friday, February 3, 2023, Augsburg University will host the championship round of the Music Listening Contest, co-sponsored by Minnesota Public Radio.

Now in its 35th year, and back in person for the first time since the pandemic, the Music Listening Contest trains students in grades 9–12 in active listening and critical analysis through a time-honored format: a quiz bowl-style tournament. The goal of the competition is to promote music literacy among high schoolers and inspire them to become lifelong participants in the musical experience.

Nearly 200 high school teams participated in regional contests in Minnesota and neighboring states on January 20. The highest-ranked teams will meet in Hoversten Chapel on Augsburg’s campus—a beautiful setting with great acoustics that also allows the student participants a taste of what it’s like to study music on a college campus.

The teams will go head-to-head in five rounds of increasing complexity, testing their musical recall and knowledge of the composers, styles, cultures, and periods represented in this year’s Music Listening Study Guide, hosted by MPR. Mindy Ratner, weekend host on Your Classical MPR, will serve as one of this year’s judges.

In addition to selections from medieval, Renaissance, baroque, classical, and music from the last century, each year’s study guide highlights a specific composer, genre, and spotlight. This year’s features are composer Caroline Shaw, concert band, and music inspired by nature.

For more information on this year’s contest, visit the Music Listening Contest website.

Congratulations to Augsburg Music Faculty members presenting their research and talent at this year’s Minnesota Music Educator’s Association Conference at the Minneapolis Convention Center. Don’t forget to check out the Augsburg University Music Exhibitor Booth at this year’s MMEA too! 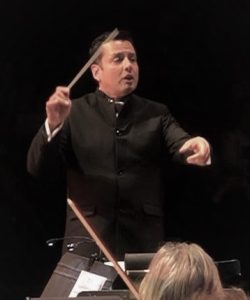 For more than four decades, Augsburg University has ushered in the Advent and Christmas seasons with Advent Vespers, a magnificent experience of music and liturgy, focusing on the theme of preparation and building up to the joyful celebration of the Incarnation. END_OF_DOCUMENT_TOKEN_TO_BE_REPLACED

Dear Alumni, Parents, and Friends of Augsburg Music,
Greetings from the Department of Music! It is a distinct privilege to share with you news of our faculty and students, of alumni, and of recent and upcoming events. Perhaps over the months since our “pivot” to online instruction in March 2020, one thing driven home to us is that, in the words of British author Rebecca West, “[Music] is not a plaything, but a necessity, and its essence, form, is not a decorative adjustment, but a cup into which life can be poured and lifted to the lips and be tasted.” END_OF_DOCUMENT_TOKEN_TO_BE_REPLACED

Congratulations to Augsburg’s Dr. Erika Svanoe, conductor of the Augsburg Concert Band, for her recent interview with the World Association for Symphonic Bands and Ensembles (WASBE). The interview explored her compositional aesthetic, with a focus on her compositions The Haunted Carousel, Steampunk Scenes/Suite, and Mary Shelley Meets Frankenstein: A Modern Day Promethean Tango.

Check out the video!

Please join us for a virtual event featuring new compositions by our Augsburg student composers. The members of the Fifth House Ensemble have been in residence at Augsburg University this spring and they collaborated with students on a series of works that have technology at their core. Some of the music is intended to be performed over Zoom and take into account the lag, others are recorded separately and edited together. The ensemble worked closely with the students over a period of months and the pieces will be a great representation of this process. In addition to these pieces, we will also be sharing some other works written collaboratively among the band students. END_OF_DOCUMENT_TOKEN_TO_BE_REPLACED 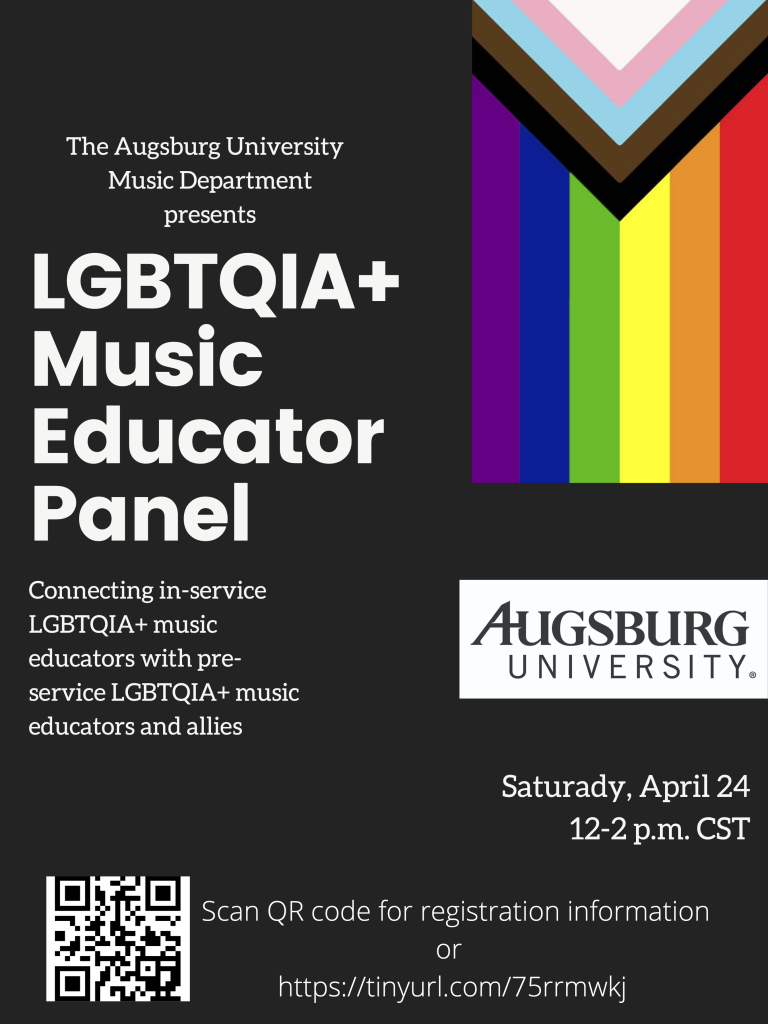 My name is Mallory Alekna and I am the new professor of music, human development, and learning at Augsburg University. Music education students at Augsburg have asked for more opportunities to interact with and learn from educators from a variety of backgrounds and perspectives. Based on student requests, my colleague Sarah Minette and I are helping to coordinate a panel of LGBTQIA+ music educators.

On April 24, seven panelists will be sharing their insights about being an LGBTQIA+ music educator. The intent of this panel is to offer guidance to preservice educators who may identify as LGBTQAI+. Additionally, allies are welcome to attend. The focus will be given to those preservice teachers (as well as inservice music educators) for whom mentorship and role modeling may be lacking in their preparation programs and institutions. END_OF_DOCUMENT_TOKEN_TO_BE_REPLACED

The Augsburg Master in Music Therapy degree has been named one of the top 50 Best Master’s in Music Degree Programs for 2021 by Intelligent.com and received their highest score for MMT programs listed!  Check out the full article for details.

END_OF_DOCUMENT_TOKEN_TO_BE_REPLACED

The Augsburg Music Department is proud of the achievements and fantastic work by Erika Svanoe & Rafael Rodriguez at this year’s conference. END_OF_DOCUMENT_TOKEN_TO_BE_REPLACED

In collaboration with MACPHAIL CENTER FOR MUSIC and AUGSBURG CAMPUS MINISTRY invites you to share virtually with the FIFTH HOUSE ENSEMBLE, in residence during the Spring 2021 Semester.

This engagement is supported by the Arts Midwest Touring Fund, a program of Arts Midwest that is funded by the National Endowment for the Arts, with additional contributions from Minnesota State Arts Board and the Crane Group.

Additional information about the ensemble, scheduled events, and registration & links are included below. END_OF_DOCUMENT_TOKEN_TO_BE_REPLACED