In the Christensen Center for Vocation, our staff team equips and accompanies students, staff, faculty, and ministry leaders as they engage in place-based vocational discernment in the public square for the common good. One of the initiatives that lives this mission is the Augsburg Youth Theology Institute (AYTI).

The first version of what is known now as AYTI, began in 2009 when Augsburg University received its first Youth Theology Network grant from the Lilly Endowment. With over 100 schools across the country leading theological education and vocational discernment experiences for high school students, we are grateful to hold this history of commitment to vocational discernment with young people.

And today, the Augsburg Youth Theology Institute (AYTI) is an annual summer program for high school students (9th-12th grades). This experience aims to offer young leaders an opportunity for place-based vocational discernment around a theological and leadership focused theme. Students who attend AYTI take their questions and curiosity to the public square to learn, listen, pray, and play on the Augsburg campus, in the neighborhood, and in the city. Participants engage in daily reflection with a theologian, community based learning, small group relationship building, and worship. This commitment to wonder about how God is calling us to the common good for the sake of the world, is the reason why high school students leave AYTI inspired to be God’s hands and feet in the world.

On the ground, AYTI is a place where staff and college mentors work diligently to create an inclusive and welcoming space for high school students to get really curious about all their big questions about God. And these days, and especially in these last few pandemic filled years, our young people have had a lot of big questions about God, the church and our call to be neighbor, racial injustice and how they should respond, mental health needs and the struggle to connect, a sense that they don’t belong, death and dying, health and living.  END_OF_DOCUMENT_TOKEN_TO_BE_REPLACED

One gift we have each year at the Augsburg Youth Theology Institute (AYTI), is hiring current college students to train and lead as mentors during our annual summer institute. These students come to AYTI with energy and gifts for serving young people who are curious about how God is working in their lives and the world. These leaders spend the spring semester developing skills for small group facilitation, studying and researching biblical stories to prepare to lead a daily devotion with our participants, and honing their leadership skills to provide a safe and welcoming place for the high school participants during the institute.

We are excited to introduce to you the 2022 AYTI Mentors. They are such a fun group and we know the high school participants are going to enjoy spending the week of AYTI with them!

END_OF_DOCUMENT_TOKEN_TO_BE_REPLACED

The Christensen Center for Vocation is proud to present the 2022 Augsburg Youth Theology Institute. After two years of virtual programming, we are looking forward to returning to in-person programming on campus at Augsburg University. We will continue to follow recommended guidelines for health and safety and will welcome a new group of high school participants to reside on campus for this year’s institute. We are delighted to welcome two Augsburg University professors as co-instructors this year to lead the institute participants in theological exploration through a college classroom experience as well as experiential learning in the community. Participants will be led by college mentors who will engage small group learning and relationship building through daily devotions and experiential learning. Together we will worship together with guest liturgists and musicians from the Twin Cities and explore the neighborhood as we seek to understand how God is calling us to [reconnect] and live in unity.

We believe God invites people to live together in unity, a beloved community. As we emerge from two years of change and uncertainty, we invite participants to ask big questions about connection and disconnection.

END_OF_DOCUMENT_TOKEN_TO_BE_REPLACED

This story has been written by Grace Porter, a 4th year Augsburg student studying Theology & Public Leadership with a concentration in Youth Studies and a minor in Music. Grace will graduate in December 2021.

I had just finished my junior year in high school, and I was starting to think about my future when I discovered that my love for God and my passion for working with young people could be an actual job! My youth pastor at the time said to me, “I have a friend at Augsburg College who runs a summer theology program for high schoolers, you should check that out!” From the moment I stepped foot onto the Augsburg campus, I knew that this place was special.

END_OF_DOCUMENT_TOKEN_TO_BE_REPLACED

We invite you to join one of the two upcoming virtual Q&A sessions on Zoom that will give you a chance to hear from staff and college mentors about the 2021 AYTI experience. This is your chance to ask questions on the general information about the institute, celebrate the  possibilities of the virtual platform, and learn more about theme content so that you can nominate students who will thrive at this year’s Institute!

These sessions will be held on Friday, March 5th, from 10-11am CST; and Tuesday, March 9th from 4-5pm CST. Please sign up using this form to receive the zoom link!

AND IT WAS VERY GOOD: Affirming and Advocating for Gender and sexual diversity in God’s Creation

What is the rightful place for LGBTQ people in God’s creation? After decades of fights over human sexuality, LGBTQ people, gender, and gender roles, the church is moving to a place of acceptance, and even advocacy. This year at the institute we are going to look at the role of LGBTQ people in scripture, in our church history, and the faithful advocacy to allow LGBTQ people to be full members of society. We are looking at the events of the past several years through a theological lens, asking what God is doing, and where our discernment can lead us.

We are excited to go on this journey of learning with our 2021 instructor, Ross Murray. Ross is the founding director of The Naming Project, a faith-based youth ministry and summer camp for LGBTQ youth and their allies. He has worked with youth and families in a variety of settings, and presented LGBTQ youth ministry around the country. Ross holds a BA from Augsburg in 2000, an MA from Luther Seminary in 2003, and an MBA from Augsburg in 2009.

In his day job, Ross is the Senior Director of Education & Training at The GLAAD Media Institute, providing activist, spokesperson, and media engagement training and education for the LGBTQ community members, corporations, the media industry and advocacy organizations desiring to accelerate acceptance for the LGBTQ community. Ross has secured national media interest in stories that bring examples of LGBTQ equality across diverse communities in America, with a specialty in the relationship between religion and LGBTQ people.

Ross is a consecrated Deacon in the Evangelical Lutheran Church in America, with a specific calling to advocate for LGBTQ people and to bridge the LGBTQ and faith communities. He is a producer for the “Yass, Jesus!” podcast, a faith and sexuality affirming podcast that believes you don’t have to pick between gay and God. In 2014, he was named one of Mashable’s “10 LGBT-Rights Activists to Follow on Twitter.”

We invite you to follow the AYTI Facebook page for updates about the theme, instructor, applications, and more. We are planning a live stream interview with Ross, so look out for that!

Also, if you are a pastor, youth leader, or mentor who would like to nominate a young person for AYTI, the nomination forms are open. Youth who are interested in attending the 2021 institute can apply now. Nominations and applications will be due April 30th, 2021 on our website here. We are excited for what this year will bring, won’t you consider joining us?

Morgan Baumbach, He, Him, His 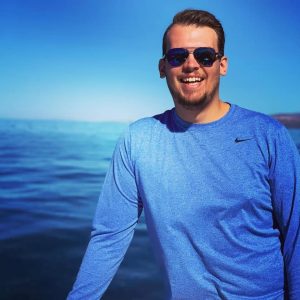 Anything about your hometown or where you’re from that you want to share: Farmington, MN. Yes there are farms and the high school football team plays for the Tractor Trophy every year.

What you are most excited about for AYTI: I am super excited to find new ways to dive into theology virtually and also make meaningful intentional connections virtually. It will be hard work but I am so excited for it.

Hi! My name is Ian Heseltine, I use he, him, his pronouns. I’m a third year at Augsburg graduating in the spring of 2021. I’m a double major in Religion and 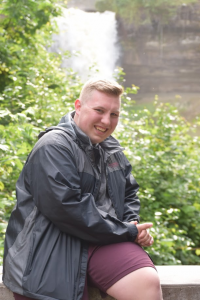 Music Business. My hometown is Alexandria, MN, two hours west of the metro area. This will be my third summer as a mentor for AYTI and I can’t wait to connect with all the students this summer, especially in this strange time we’re living through. AYTI is always a highlight of my summer because I get to connect with highschoolers and also show them how great Augsburg is. Over winter break I went on an Augsburg Study Abroad trip to London, England & Edinburgh, Scotland. That trip has been my all time favorite, and was the first time I had ever been overseas. We spent a large amount of time talking about Harry Potter which is one of my favorites so the trip made a lasting impact on me! 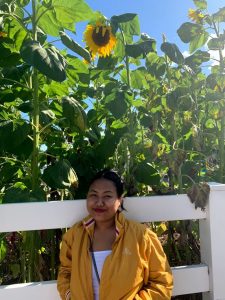 Hi, my name is Grace Koch Muchahary, I am originally from Northeast, India. I am pursuing my Bachelor’s degree at Augsburg University. Currently, I am a Sophomore going to be Junior next year, and I will be graduating in 2022. I am majoring in Sociology and planning on minoring in Gender-Sexuality and Women’s studies. The reason I got this beautiful opportunity to study in the United States is because I received a scholarship from ELCA, IWL(International Women Leadership) program. Before coming to Augsburg, I could never have dreamed of getting to engage with so many different communities here around me. One of my favorite experiences and community is this program AYTI (Augsburg Youth Theology Institute). I couldn’t stop myself from being a part of AYTI again this summer. I love this program, and this year I am hoping to see new activities, new learning and especially to meet new amazing people. My favorite place I have been so far would be Chicago, and Iowa (because it is peaceful).

Favorite Bible Verse: John 14:14: Jesus says, If you ask anything in my name I will do it. 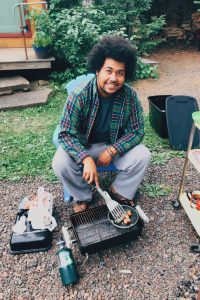 What I’m excited about: Helping students ask the tough questions about faith