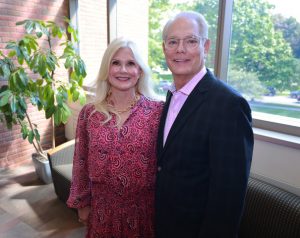 When Tom ’72 and Karen Howe were thinking about how they could support Augsburg, they wanted to spark possibilities for the next generation of entrepreneurs and leaders. They decided to establish the Thomas ’72 and Karen Howe Endowed Professorship for Entrepreneurship at Augsburg University. Tom graduated from Augsburg in 1972 with a degree in business administration and he and Karen both have extensive leadership experience in the business sector. Tom was the owner and CEO of SwansonFlo Co from 1991-2022 while Karen was an account executive at the creative brand agency, Yamamoto, and later went into business with their daughter, Liz, owning a pet boutique, LuLu & Luigi, in St. Louis Park and Wayzata.

Although he was studying business, Tom also participated on the wrestling team, made lifelong friends as a member of Gamma Phi Omega, (known today as the Gammas) and enjoyed taking classes that were outside of his major. Upon reflecting on what he took away from his time at Augsburg, Tom explained what the Hagfors Center for Science, Business, and Religion represents to him. “Although the building was built forty years after I graduated, the three disciplines taught in that space illustrate exactly what made a lasting impact on me,” Tom shared. “My business courses prepared me for a career, but I uniquely remember a religion class that explored all faiths and an astronomy class that examined our physical origins. They challenged my beliefs and expanded my mind. I may not have known it at the time, but Augsburg gave me much more than a degree. Augsburg taught me critical thinking which is applied to every area of my life.”

Business and entrepreneurship followed Tom and Karen after graduating. Tom began working for his father’s company, Howe Inc. – a business that had been in the family for three generations. “It was a great learning experience where I could contribute ideas and be part of the decision-making process, but I also had opportunities to fail and learn from my mistakes.” Karen’s focus in home economics at the University of Minnesota contributed to her interest in the field. “I enjoyed the marketing classes,” Karen stated. “Understanding its [marketing] many facets became highly important in my day-to-day work.” It was at Yamamoto where Karen honed her skills that prepared her to own her own business.

Throughout the years, Karen and Tom have supported Augsburg in instrumental ways. At the heart of their philanthropy is their connection to Augsburg’s mission. “Augsburg was founded as a Norwegian Lutheran college and provided an education to first-generation students. Today it continues to carry out that objective and provide students a three-dimensional education: make a living, make a life, and build a community,” Tom said.

Paul Mueller ’84, chair of Augsburg’s Great Returns campaign shared, “We are all grateful for Tom and Karen’s very generous gift to Augsburg. The Howes believe an Augsburg education will produce the next generation of business leaders who manifest ethical and conscious entrepreneurship—business leadership that makes the world a better place.”

Through the newly established Thomas ’72 and Karen Howe Endowed Professorship for Entrepreneurship, they hope to strengthen Augsburg’s business department and inspire innovation and leadership. “Two-thirds of all students take classes or major in business. It introduces them to the free-market system, the positives of capitalism, and the power of freedom,” Tom shared. Their accomplishments and desire to help current and future Auggies find success can all be tied back to the American dream. “You have to believe in yourself, get inspired, and figure out how your unique ideas can benefit society,” Tom said. “There are many ways people can find success and not everyone has the same starting point. You don’t have to know everything, but identify your talents and surround yourself with people who will complement your strengths.” Karen added. For Tom and Karen, supporting Augsburg is an investment in future generations that has unlimited potential.

Provost and and Senior Vice President for Academic and Student Affairs, Paula O’Loughlin shared, “We are incredibly grateful for the Howe’s generosity in establishing this endowed Professorship. Developing leaders through entrepreneurship among our students has been a signature commitment in Augsburg’s curriculum since our beginnings. The Thomas and Karen Howe Endowed Professorship in Entrepreneurship will enable us to broaden our offerings for students interested in starting their own businesses for years to come.” Thanks in part to her Columbia boots and the diligence of her “amazing” guardian angel, Carol Ott ’90 has joined the legion of angels ensuring Augsburg’s future.

“You never know when your time is up,” Ott decided after a 2014 pedestrian accident shook her world. She had just left her yoga class when a truck struck her, trapping her left foot under the tire. Apart from whiplash and some chiropractic needs, she emerged relatively unscathed. But the event gave her pause, and reviewing other meaningful times in her life prompted her to remember Augsburg in her will.

“The relationships built during my four years there were the most impactful of my life,” says Ott, who followed her brother to Augsburg. The two hailed from the small Minnesota town of Lakeville, where their family lived on 10 acres in what was then a farming community.

As a freshman, Ott immediately connected with her orientation leader, Jacquie Berglund ’87, and the two have remained friends ever since. Ott was a chemistry and marketing double major who planned to make and market perfume, but a dismal business climate at graduation steered her toward marketing instead. Berglund, too, ended up in business, as CEO and co-founder of Finnegans, a beer company that is the state’s 10th largest and the world’s first to donate its profits to those in need.

“What I loved most was the ethics, learning right from wrong, and figuring out how to combine my religious beliefs with my daily life. I was very much influenced by Pastor Wold’s views on marketing ethics and religion,” Ott says. (Pastor Dave Wold, Augsburg’s pastor since 1983, was named Campus Pastor Emeritus when he retired in 2013.)

After earning her MBA from St. Thomas in 1996, Ott had ample opportunity to put her beliefs into practice in a career that has ranged widely both geographically and corporately. Her expertise in first direct, then digital marketing and e-commerce has benefitted such companies as Fingerhut, Carlson Wagonlit, Select Comfort, Petco, and ShopNBC, as she moved from West Coast to East Coast and back again to Minnesota.

Now director of marketing analytics at Best Buy, Ott returns to Augsburg annually to share her experience with marketing classes. She is also a fan of class reunions and looks forward to participating in the big one, Augsburg’s sesquicentennial. “When we had our 25th reunion, we just picked up where we left off. It’s a small school, and you know everyone in your grade.”

She has not yet designated where her planned gift will go, though she is considering both science and business. She also welcomes to campus the new Norman and Evangeline Hagfors Center for Science, Business, and Religion, the capital campaign which surpassed its $50 million fundraising goal. Groundbreaking for the building will take place on April 29, 2016.

“Science, business, religion—tying those pillars together is what drives me,” Ott says.