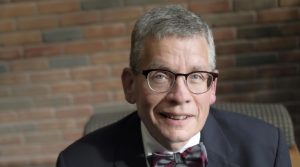 On August 13, President Paul Pribbenow was one of four leaders from the Coalition of Urban and Metropolitan Universities who participated in a virtual discussion on confronting systemic racism. The 90-minute discussion, “Where Do We Go From Here? Creating Lasting Change to Combat Systemic Racism and Inequities,” was moderated by PBS NewsHour journalist Fred de Sam Lazaro.

The panelists were asked to deal with hard questions. Will reactions to the deaths of George Floyd and Breonna Taylor finally generate measurable progress? What do universities need to do to help lead change? What are we prepared to sacrifice? Will white people acknowledge that they cannot in good conscience maintain silence in the face of racism?

In response, Pribbenow declared the urgent need to respond to systemic racism. He spoke of the need for leaders to disrupt the status quo in hiring decisions. He said that as a leader he has been asking, “What are those things that we can do quickly that actually plant a seed, that actually will grow something sustainable for the future?”

A recording of the discussion is available on YouTube.