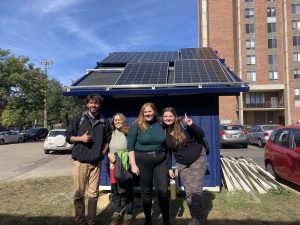 The small crowd gathered by the freeway wall burst into applause as Professor Joe Underhill fired up a handheld sander. Despite the cloudy day, it was powered by the sun.

The shed at the west end of Lot B attracted plenty of curiosity during its construction in the summer of 2022. On October 6, it was officially unveiled as a solar-powered demonstration project Underhill calls a “Unit of Resistance.”

Temporarily located at the end of 21st Ave, the shed currently houses tools and supplies for the River Semester, the Center for Global Education and Experience program Underhill also leads. Both projects, he says, are part of an attempt to rethink higher education as something more hands-on and to empower students with a sense of agency.

“In the face of huge problems like climate change and the student mental health crisis, what small steps can we take to focus on what we can do, instead of what we can’t?” he asks.

The idea for a solar-powered work shed on campus arose last spring in Underhill’s The City and Environment keystone course. Inspired by the Augsburg Day Student Government’s 2021 resolution calling on Augsburg to explore on-campus solar and reach carbon neutrality by 2030, the class wrote a grant proposal to the ADSG’s Environmental Action Committee to buy solar panels.

EAC funded the purchase of six 320-watt Renogy Solar panels, a 24-volt battery bank, and a power inverter. Underhill used other grant funds to purchase wood for the 8×8-foot structure, which features a roof slanted at 45 degrees—the average angle of the sun at Augsburg’s latitude. He and students built it over the spring and summer, and electrical work was completed this fall by Aaron Jarson, the Augsburg electrician.

Senior Zoe Barany says that, like the campus solar and carbon neutrality resolution, the shed is a tangible expression of students’ interest in advancing Augsburg’s climate commitments.

“The funds for the project came from the campus Green Fee,” says junior Maya Merritt, who leads sustainability initiatives as the student government EAC officer. “With the Green Fee, we’re effectively taxing ourselves to support sustainability. If you’re paying the Green Fee, you get a say in where it’s going.”