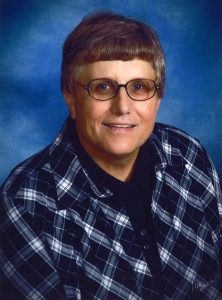 Basketball has played an important role in Patricia (Patty) Piepenburg’s ’69 life. In her small hometown of Grove City, Minnesota, Patty discovered her natural athleticism. “I grew up pre-Title IX, so the only exposure I really had to sports were through intramurals and gym class,” she shared. Her high school team was organized through the Girls Athletic Association (GAA) where she and her teammates had to work hard to find other teams to play. They eventually convinced their advisor to play a neighboring town. In Patty’s words, it could be more accurately described as “scheduling a time two schools could get together and do intramural activities.” At the time, the rules were completely different for women’s basketball. It was played on half the court and each team had 6 players. Nonetheless, Patty fell in love with the game.

While she was a student at Augsburg, she participated on the Auggiettes women’s basketball team. During her four seasons, the team only lost four games, and were completely undefeated her junior year. She was also the leading scorer her last two years in school. A big part of the team’s success can be attributed to Patty’s coach at the time, LaVonne Johnson Peterson, or Mrs. Pete, more affectionately. “She was a great teacher and friend. She played a big factor in me staying at Augsburg all four years,” Patty shared. 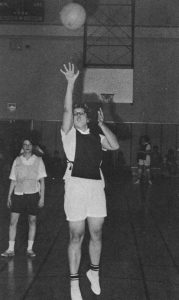 Patty graduated with a degree in Physical Education in 1969. She taught and coached various grade levels in Atwater, Minnesota while also working double time to help her dad with their family farm. “There came a point where I was just burned out and couldn’t do both anymore,” Patty reflected on deciding to leave coaching and teaching after over 30 years. The family farm, conservation, and wildlife remain an important part of Patty’s life – she has even won awards for her conservation projects!

In 2011, Patty was inducted into Augsburg’s Athletics Hall of Fame. Although some of her teammates were inducted several years earlier, Patty wanted to be retired when she accepted the honor. “A hall of famer is someone who not only contributed to the sports while they were in school, but it should also reflect what they went on to do after college,” she said. “I felt like I needed to earn my place.”

Patty has given a generous gift to help update the Si Melby Women’s Locker room. The dedication will take place in October during Augsburg’s Homecoming Week and All-School Reunion, where Augsburg will celebrate the 50th anniversary of Title IX. When reflecting on what inspired this decision, Patty shared, “Trying to figure out your estate plans is difficult when you aren’t married and don’t have kids… you want to channel it to where you think someone made a difference. I chose the women’s locker room because I would love to see a legacy.” The advice Patty has for current and future generations of women athletes at Augsburg is, “Always be prepared, be yourself, and willingly accept opportunities for leadership.”

To hear Karen Johnson ’66 speak about her longtime Augsburg friend, Joyce Pfaff ’65, it’s easy to understand what led her to make a commitment to start an endowment fund in Joyce’s honor. Her admiration for Joyce runs deep. While Joyce and Karen met as students at Augsburg, the story of how Karen found her way to Augsburg serves as an example in fiscal discipline and vision.

“I am an only child. My mother lived through the depression and she wanted me to go to the U of M. When I was in first grade she opened a bank account for me and set aside one quarter a week. I was not to spend one penny of that money.”

Karen goes on,” By the time I got to high school we had saved $800, the same as Augsburg’s tuition at the time. I was not excited about the prospect of attending the U. In fact, it scared me right out of my tree!  I visited Augsburg and felt welcome there. My mother wondered why I would spend all that money on my first year of college. But she realized it was my choice.”

That was the year Karen met Joyce at Augsburg.

Creating Memories Together at Augsburg

“We both lived at home as tuition money was tight and it was a good option. Darryl Carter from Columbia Heights also lived at home. Darryl and his old Chevy would make the Northeast Minneapolis rounds to pick up Joyce, myself and four others every day. We paid him a minimal amount of maybe $1 a week for that ride. It seemed like his car was held together with nothing but wire and duct tape. We pushed it out of snow drifts during many winter storms,” she laughed. “We were really bunched into that car, but it got us through.”

“We met our physical education instructor Mrs. LaVonne Peterson (Mrs. Pete), who was Joyce’s first mentor. She was our fun teacher. She inspired in all her students the attitude that movement and activity were not only fun and important now, but also for life. She was herself, an inspiration.”

“Modern dancing was not allowed at Augsburg in those days so we had square dances and all school group activities designed by Mrs. Pete and organized by students in the physical education department. She was the only female physical education professor at Augsburg in the 60s and the women had only one sport, basketball. They were called Auggiettes or Little Auggies. What the heck is that?”

Karen studied Elementary Education with a minor in Physical Education. Joyce majored in Physical Education. After they graduated Joyce returned to Augsburg where Judy Olson, another of their classmates, was already teaching. According to Karen, the college was looking for a gymnastics instructor. Joyce was it. Little did they know how that hire would work out.

“Joyce didn’t really have any gymnastics experience but she put a team together. It was the first sport she coached. They were terrible, but they all learned a lot and had a good experience. And Joyce made sure they got their due.”

The Dawn of Title IX

This was before the advent of the federal law declaring that women must have equal access to sports. Joyce Pfaff pioneered the meaning of that law before it was enacted.

According to Karen, “If the men’s teams got money to go on a bus, the women had to find the money to get themselves to their competitions. Joyce was all for physical education equality. Whether an athlete or not, her mission was to make sure that women at Augsburg had all the opportunities to participate and better themselves.”

Then along came Title IX. And Karen reports, “Joyce ran with it!”

One of the stories she tells in Joyce’s efforts to equalize athletics for women is a story of running.

“She would invite the Dean to run with her. She’d run with him until he was breathing hard and she thought he was ready for serious talk or he was out of time. Then she would ask him for money or improvements for women’s programs. It often worked.”

For Joyce, physical education was both physical and mental. She advocated that everyone was a student first, then an athlete, and everyone should reward his or her body with exercise.

“She never wavered from her mission and vision that athletics or activity are for everyone. She made a big dent on the men. Over the years she had many encounters with the men’s programs and scheduling. Her positive and sometimes courageous attitude helped build the women’s athletic program of today.  She never gave up!”

The idea to make a gift to Augsburg to honor Joyce came recently.

In Karen’s words, “Initially, I thought I would keep my estate planning idea to myself. But then I learned about Great Returns -the effort to increase Augsburg’s endowment and I thought, I can help do that!  So I met with a committee of Joyce supporters, plus Donna McLean (of the Augsburg Advancement team) and Jeff Swenson ’79 (Athletic Director) and made it official. I’m giving a portion of my estate to help fund the Joyce Pfaff ’65 Endowment fund!”

Karen summed it up, “Joyce has dedicated her life’s work to all the women of Augsburg to improve their lives through physical education and movement. Her passion for the importance of lifetime activity and women’s sports can live on through this endowment. The goal of the fund will help convey to all students and faculty the importance of healthy exercise and to include it in their lifelong activity. The endowment gives us a chance to recognize Joyce’s efforts and encourage more people to follow her example.”